THE DANGER OF SITTING ON LONG FLIGHTS 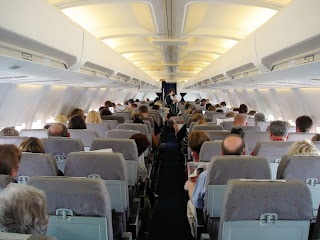 Heavy D’s name highlights one of the risk factors for the pulmonary embolism that killed him: obesity.

The 44-year-old rapper, whose real name was Dwight Arrington Myers, collapsed outside his Beverly Hills home Nov. 8 and died later at a hospital. He had recently flown from England to Los Angeles, which, combined with his weight and a pre-existing heart condition, caused deep leg vein thrombosis, said Craig Harvey, a spokesman for the Los Angeles County Coroner’s Office. A blood clot, or thrombus becomes especially dangerous when a piece of it breaks off and travels to the lung, as it did in Myers' case.

It’s been known since the early 1950s that air travel was linked to blood clots. According to the Centers for Disease Control and Prevention, research has shown that long-distance travel longer than four hours, compared to not traveling at all, doubled the risk, which remained elevated for two months after the trip.

One study of nearly 9,000 employees of several international companies and organizations found that the absolute risk of a blood clot was one per 4,656 flights more than four hours long, according to the CDC. Other risk factors include recent major surgery, oral contraceptives, pregnancy and cancer.

“The clots that kill you are big,” says Dr. Jody Henson, an emergency medicine physician at Scott & White Hospital in Round Rock, Texas. “Typically, if it was big enough, you’d feel some pain in your legs or some swelling in your calf muscles.”

Of course, Henson notes, obese passengers might not notice swelling in their legs. But, like pregnant women, they’re at a greater risk for clots because blood doesn’t return as quickly from their legs to their heart.

To minimize the risk of a potentially lethal blood clot when taking a long trip, whether by plane, train or automobile, Henson says, get up and move around periodically, or at least wiggle your legs back and forth. Staying hydrated—skip the alcoholic beverages—helps too, according to the CDC.

And when you’re making your flight reservation, you might want to ask for an aisle seat. A 2008 Dutch study of recent air travelers found double the risk of a blood clot in those who had a window seat, particularly if they were obese. That’s probably because they were more cramped, the researchers speculated.