THE ARTIST WHO CREATED "THE JOKER" DIES 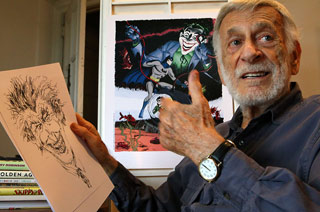 Mourning in Gotham City, and across all of fanboy nation: Legendary comic book artist Jerry Robinson has died at the age of 89. Robinson, who was born in Trenton, N.J., on Jan. 1, 1922, was recruited to DC Comics by Batman creator Bob Kane and made key contributions to the character’s mythos.

In addition to Robin the Boy Wonder, Robinson is credited with helping to develop Bruce Wayne’s butler, Alfred, and two of the caped crusader’s best-known enemies, Two-Face and The Joker, both of which were featured in director Christopher Nolan’s last Batman flick, The Dark Knight, played by Aaron Eckhart and an Oscar-winning Heath Ledger, respectively. (It should be noted that the business of determining who came up with what in comics can be tricky and contentious. For example, Bob Kane — who died in 1998 — claimed that he and original Batman scribe Bill Finger concocted The Joker.)

During a career that spanned decades, Robinson also taught at the School of Visual Arts in New York City and wrote several books about comic book history. In a 2009 interview with the Los Angeles Times, Robinson said he was most proud of his acclaimed work as a political cartoonist, which included two syndicated newspaper strips, Still Life and Life With Robinson. Robinson told the Times: “I did 32 years of political cartoons, one every day for six days a week, I wrote and drew every word, every line.  … That body of work is the one I’m proudest of. Looking at the Batman pages is like revisiting my youth. My first seven years in New York were the first seven years of Batman itself. While my time on Batman was important and exciting and notable considering the characters that came out of it, it was really just the start of my life.”

In his later years, Robinson earned a reputation for being “an ambassador of comics” (to use the title of a 2010 biography about the artist, written by N.C. Christopher Couch) and took up the thorny cause of artists’ rights. Most notably, in the mid-1970s, Robinson advocated for Jerry Siegel and Joe Shuster in their successful bid to gain greater compensation and credit for creating Superman.

Robinson is survived is by his wife, two children, and two grandchildren. His admirers are legion. Said comic book superstar and DC Entertainment co-publisher Jim Lee in a statement: “Jerry Robinson illustrated some of the defining images of pop culture’s greatest icons. As an artist myself, it’s impossible not to feel humbled by his body of work. Everyone who loves comics owes Jerry a debt of gratitude for the rich legacy that he leaves behind.”
---------
http://shelf-life.ew.com/2011/12/09/jerry-robinson-dies/
Posted by pratanacoffeetalk at 8:14 AM