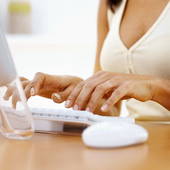 More than 90,000 new cancer cases a year in the United States may be due to physical inactivity and prolonged periods of sitting, a new analysis shows.

The analysis, being presented today at the annual conference of the American Institute for Cancer Research (AICR) in Washington, D.C., cites about 49,000 cases of breast cancer and 43,000 of colon cancer.

"This gives us some idea of the cancers we could prevent by getting people to be more active," says epidemiologist Christine Friedenreich of Alberta Health Services in Calgary, Canada.

Alpa Patel, an American Cancer Society epidemiologist who looked at the data, says the numbers "seem like very reasonable estimates."

Experts have known for years that physical activity decreases the risk of chronic diseases including cancer, heart disease and diabetes, Friedenreich says, but the new data give estimates on the number of cases that might be prevented if people were more physically active.

"A brisk daily walk of at least 30 minutes could lower a person's risk over time for breast cancer and colon cancer," says Alice Bender, a registered dietitian with AICR.

Patel and others also have investigated the health dangers of sitting too long without moving around, which is called "sitting disease."

In a study of 123,000 people, she found that the more time people spent sitting, the higher their risk of dying early. "Even among individuals who were regularly active, the risk of dying prematurely was higher among those who spent more time sitting," she says.

Even if you are doing half an hour of aerobic activity a day, you need to make sure you don't sit the rest of the day, Patel says. "You have to get up and take breaks from sitting."

Emerging research indicates that prolonged sitting also increases the risk of some types of cancer, such as colon, endometrial and ovarian cancers, Friedenreich says.

James Levine, a professor of medicine at Mayo Clinic in Rochester, Minn., says many people sit an average of seven to 9½ hours a day. "If you've sat for an hour, you've probably sat too long," he says.

Friedenreich is looking into why exercise reduces cancer risk. In a study of 320 post-menopausal women, she has found that physical activity appears to decrease the risk of cancer by increasing insulin sensitivity and reducing body fat, inflammation, metabolic hormones and sex steroids hormones.
----------
http://yourlife.usatoday.com/health/medical/cancer/story/2011-11-03/Prolonged-sitting-linked-to-breast-cancer-colon-cancer/51051928/1
http://cdn7.fotosearch.com/bthumb/FSA/FSA161/x29441273.jpg
Posted by pratanacoffeetalk at 4:50 PM