ARE YOU READY FOR THE JOURNEY? 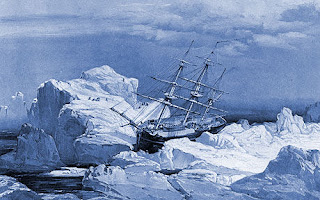 In her book "Teaching a Stone to Talk" (New York: Harper Collins, 1988) Annie Dillard reveals a sad, but poignant story about what happens when we set out unprepared. She tells of a British Arctic expedition which set sail in 1845 to chart the Northwest Passage around the Canadian Arctic to the Pacific Ocean. Neither of the two ships and none of the 138 men aboard returned.

Captain Sir John Franklin prepared as if they were embarking on a pleasure cruise rather than an arduous and grueling journey through one of earth's most hostile environments. He packed a 1,200 volume library, a hand-organ, china place settings for officers and men, cut-glass wine goblets and sterling silver flatware, beautifully and intricately designed. Years later, some of these place settings would be found near a clump of frozen, cannibalized bodies.

The voyage was doomed when the ships sailed into frigid waters and became trapped in ice. First ice coated the decks, the spars and the rigging. Then water froze around the rudders and the ships became hopelessly locked in the now-frozen sea.

Sailors set out to search for help, but soon succumbed to severe Arctic weather and died of exposure to its harsh winds and sub-freezing temperatures. For some twenty years, remains of the expeditions were found all over the frozen landscape.

The crew did not prepare either for the cold or for the eventuality of the ships becoming ice-locked. On a voyage which was to last two to three years, they packed only their Navy-issue uniforms and the captain carried just a 12-day supply of coal for the auxiliary steam engines. The frozen body of an officer was eventually found, miles from the vessel, wearing his uniform of fine blue cloth, edged with silk braid, a blue greatcoat and a silk neckerchief -- clothing which was noble and respectful, but wholly inadequate.

Historians may doubt the wisdom of such an ill-prepared journey. But more important for us is the question, "Are we, too, prepared for the lengthy voyage we've embarked upon, that journey we call "life"? Have we made ourselves ready for all that will surely await us?

Physically and mentally, are we prepared to handle what may come? Do we regularly stay fit through daily study and exercise? Will our minds and bodies be ready to cope with challenges which will arise?

To embark on a journey unprepared can set us up for disastrous results. But the good news is, we can still prepare for ours. And in large part, the success of our voyage will be determined by our regular and systematic preparation.