THE THINGS YOU NEED TO KNOW ABOUT CINNAMON 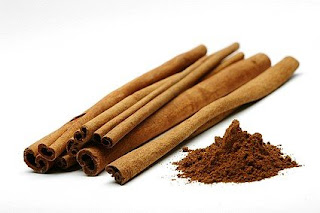 Studies have shown that just 1/2 teaspoon of cinnamon per day can lower LDL cholesterol.
Several studies suggest that cinnamon may have a regulatory effect on blood sugar, making it especially beneficial for people with Type 2 diabetes.

In some studies, cinnamon has shown an amazing ability to stop medication-resistant yeast infections.

In a study published by researchers at the U.S. Department of Agriculture in Maryland, cinnamon reduced the proliferation of leukemia and lymphoma cancer cells.
It has an anti-clotting effect on the blood.

In a study at Copenhagen University, patients given half a teaspoon of cinnamon powder combined with one tablespoon of honey every morning before breakfast had significant relief in arthritis pain after one week and could walk without pain within one month.

When added to food, it inhibits bacterial growth and food spoilage, making it a natural food preservative.

It is a great source of manganese, fiber, iron, and calcium.

Before taking cinnamon, make sure to see our Side Effects of Cinnamon article for side effects and contraindications.


Side Effects of Cinnamon

Here are some of the side effects of cinnamon that you need to be aware of.

Note on Identification
"Cassia" is an herb which looks and tastes like cinnamon and can be found on some store shelves labeled as cinnamon when actually it does not carry the health benefits of true "Ceylon cinnamon". The first step in using cinnamon safely is knowing what you are getting. Cassia contains higher amounts of coumarin than true cinnamon and coumarin is responsible for some of the side effects listed below.

Skin Irritation
The essential oil of cinnamon must never be applied directly to the skin. Small amounts of the diluted oil can be used for refreshment and to fight infection but the oil alone can quickly cause severe burning and irritation to exposed skin. Allergies are rare but sometimes manifest as sores.
Stomach Irritation
Those with any prior condition of the digestive system such as an ulcer or irritable bowel syndrome should be careful when eating cinnamon. Large amounts (more than 1/2 a teaspoon) may cause the lining of the stomach to become irritated.

Increased Heart Rate
Large amounts of cinnamon have been reported to increase heart rate which could be dangerous for those with a heart condition. Increased heart rate is also linked to cinnamon oil poisoning in children.

Uterine Contractions
Some traditional medicine practitioners will give a mother cinnamon in order to induce or normalize contractions. Therefore, pregnant women may want to avoid cinnamon.

Blood Thinning
Cinnamon may have anti-clotting properties and may cause over thinning of the blood if you are taking blood thinners. Large doses of cinnamon should also not be used before surgery, during heavy menstruation, or in any situation where a lot of bleeding may occur.

Kidney and Liver Problems
There is anecdotal evidence suggesting that people with kidney or liver problems or people who are taking drugs that are processed in the liver may want to avoid taking high doses of cinnamon due to its coumarin content. Coumarin levels are higher in cassia than in true cinnamon, but cinnamon does contain compounds that are known to be toxic to the kidneys at high doses.

Blood Sugar
People taking medication to regulate blood sugar should be careful when taking cinnamon, as it also has a powerful effect on blood sugar and the two in combination may lower blood sugar too much.

Antibiotics
Cinnamon is a powerful antibiotic, but check with your doctor before taking cinnamon if you are taking prescription antibiotics, because it may change the way prescription antibiotics act on the body.
----------
http://www.healthdiaries.com/eatthis/10-health-benefits-of-cinnamon.html
http://www.healthdiaries.com/eatthis/side-effects-of-cinnamon.html
http://iloveadrenaline.files.wordpress.com/2010/01/cinamon.jpg?w=425
Posted by pratanacoffeetalk at 2:03 PM