THE TEA-MASTER AND THE ASSASSIN 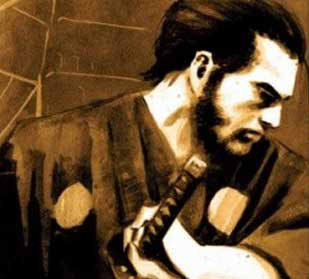 Taiko, a warrior who lived in Japan before the Tokugawa era, studied Cha-no-yu, tea etiquette, with Sen no Rikyu, a teacher of that aesthetical expression of calmness and contentment.

Taiko’s attendant warrior Kato interpreted his superior’s enthusiasm for tea etiquette as negligence of state affairs, so he decided to kill Sen no Rikyu. He pretended to make a social call upon the tea-master and was invited to drink tea.

The master, who was well skilled in his art, saw at a glance the warrior’s intention, so he invited Kato to leave his sword outside before entering the room for the ceremony, explaining the Cha-no-yu represents peacefulness itself.

Kato would not listen to this. “I am a warrior,” he said. “I always have my sword with me. Cha-no-yu or no Cha-no-yu, I have my sword.”

“Very well. Bring your sword in and have some tea,” consented Sen no Rikyu.

The kettle was boiling on the charcoal fire. Suddenly Sen no Rikyu tipped it over. Hissing steam arose, filling the room with smoke and ashes. The startled warrior ran outside.

The tea-master apologized. “It was my mistake. Come back in and have some tea. I have your sword here covered with ashes and will clean it and give it to you.”

In this predicament the warrior realized he could not very well kill the tea-master, so he gave up the idea.
-------
http://www.inspirationalstories.com/the-tea-master-and-the-assassin/
http://www.badrobotninja.com/wp-content/uploads/2010/12/Marvel-5-Ronin.jpg
Posted by pratanacoffeetalk at 5:15 AM