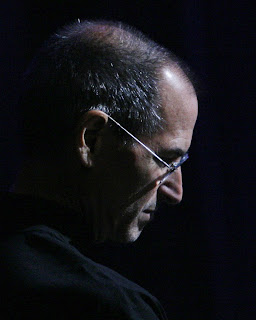 In the lead up to today's release of the Steve Jobs biography, there's been an increasing stream of news surrounding its subject. As a business researcher, I was particularly interested in this recent article that referenced from his biography a list of Jobs's favorite books. There's one business book on this list, and it "deeply influenced" Jobs. That book is The Innovator's Dilemma by HBS Professor Clay Christensen.

But what's most interesting to me isn't that The Innovator's Dilemma was on that list. It's that Jobs solved the conundrum.

When describing his period of exile from Apple — when John Sculley took over — Steve Jobs described one fundamental root cause of Apple's problems. That was to let profitability outweigh passion: "My passion has been to build an enduring company where people were motivated to make great products. The products, not the profits, were the motivation. Sculley flipped these priorities to where the goal was to make money. It's a subtle difference, but it ends up meaning everything."

Anyone familiar with Professor Christensen's work will quickly recognize the same causal mechanism at the heart of the Innovator's Dilemma: the pursuit of profit. The best professional managers — doing all the right things and following all the best advice — lead their companies all the way to the top of their markets in that pursuit... only to fall straight off the edge of a cliff after getting there.

Which is exactly what had happened to Apple. A string of professional managers had led the company straight off the edge of that cliff. The fall had almost killed the company. It had 90 days working capital on hand when he took over — in other words, Apple was only three months away from bankruptcy.

When he returned, Jobs completely upended the company. There were thousands of layoffs. Scores of products were killed stone dead. He knew the company had to make money to stay alive, but he transitioned the focus of Apple away from profits. Profit was viewed as necessary, but not sufficient, to justify everything Apple did. That attitude resulted in a company that looks entirely different to almost any other modern Fortune 500 company. One striking example: there's only one person Apple with responsibility for a profit and loss. The CFO. It's almost the opposite of what is taught in business school. An executive who worked at both Apple and Microsoft described the differences this way: "Microsoft tries to find pockets of unrealized revenue and then figures out what to make. Apple is just the opposite: It thinks of great products, then sells them. Prototypes and demos always come before spreadsheets."

Similarly, Apple talks a lot about its great people. But make no mistake — they are there only in service of the mission. A headhunter describes it thus: "It is a happy place in that it has true believers. People join and stay because they believe in the mission of the company." It didn't matter how great you were, if you couldn't deliver to that mission — you were out. Jobs's famous meltdowns upon his return were symptomatic of this. They might have become less frequent in recent years, but if a team couldn't deliver a great product, they got the treatment. The exec in charge of MobileMe was replaced on the spot, in front of his entire team, after a botched launch. A former Apple product manager described Apple's attitude like this: "You have the privilege of working for the company that's making the coolest products in the world. Shut up and do your job, and you might get to stay."

Everything — the business, the people — are subservient to the mission: building great products. And rather than listening to, or asking their customers what they wanted; Apple would solve problems customers didn't know they had with products they didn't even realize they wanted.

By taking this approach, Apple bent all the rules of disruption. To disrupt yourself, for example, Professor Christensen's research would typically prescribe setting up a separate company that eventually goes on to defeat the parent. It's incredibly hard to do this successfully; Dayton Dry Goods pulled it off with Target. IBM managed to do it with the transition from mainframes to PCs, by firewalling the businesses in entirely different geographies. Either way, the number of companies that have successfully managed to do it is a very, very short list. And yet Apple's doing it to itself right now with the utmost of ease. Here's new CEO Tim Cook, on the iPad disrupting the Mac business: "Yes, I think there is some cannibalization... the iPad team works on making their product the best. Same with the Mac team." It's almost unheard of to be able to manage disruption like this.

They can do it because Apple hasn't optimized its organization to maximize profit. Instead, it has made the creation of value for customers its priority. When you do this, the fear of cannibalization or disruption of one's self just melts away. In fact, when your mission is based around creating customer value, around creating great products, cannibalization and disruption aren't "bad things" to be avoided. They're things you actually strive for — because they let you improve the outcome for your customer.

When I first learned about the theory of disruption, what amazed me was its predictive power; you could look into the future with impressive clarity. And yet, there was a consistent anomaly. That one dark spot on Professor Christensen's prescience was always his predictions on Apple. I had the opportunity to talk about it with him subsequently, and I remember him telling me: "There's just something different about those guys. They're freaks." Well, he was right. With the release of Jobs's biography, we now know for sure why. Jobs was profoundly influenced by the Innovator's Dilemma — he saw the company he created almost die from it. When he returned to Apple, Jobs was determined to solve it. And he did. That "subtle difference" — of flipping the priorities away from profit and back to great products — took Apple from three months away from bankruptcy, to one of the most valuable and influential companies in the world.

James Allworth is a Fellow at the Forum for Growth and Innovation at Harvard Business School. Follow him on Twitter at @jamesallworth.