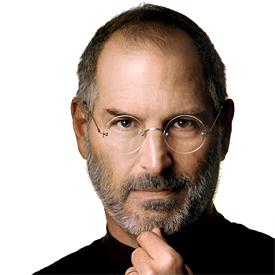 That's but the capstone of a gripping eulogy delivered by Steve Jobs's biological sister, author Mona Simpson, at Jobs's October 16 memorial service at Stanford University. The New York Times printed a transcript of Simpson's thoughts today, and it reveals a great deal of the unique relationship that Jobs shared with his sister–who he met for the first time when she was 25–as well as the more intimate moments of Jobs's life and final days.

In her speech, Simpson described Jobs, quite simply, as a person who "worked at what he loved. He worked really hard. Every day."

His passion transcended his career – an obvious target of Jobs's driven nature – and spread into his relationships with his family, his friends, and his own litany of personal goals. And with many of these, notes Simpson, Jobs found great success. But he still treated his various accomplishments with a degree of humility.

"Most of the choices he made from the time I knew him were designed to dissolve the walls around him. A middle-class boy from Los Altos, he fell in love with a middle-class girl from New Jersey. It was important to both of them to raise Lisa, Reed, Erin and Eve as grounded, normal children," Simpson said.

"Their house didn't intimidate with art or polish; in fact, for many of the first years I knew Steve and Lo together, dinner was served on the grass, and sometimes consisted of just one vegetable. Lots of that one vegetable. But one. Broccoli. In season. Simply prepared. With the just the right, recently snipped, herb."
While Jobs struggled with the various ramifications of his pancreatic cancer–including, no less, the recovery process from a full liver transplant–it allowed the Apple co-founder to refocus his passion in new directions. As Simpson said, "we watched his life compress into a smaller circle."

"He tried. He always, always tried, and always with love at the core of that effort. He was an intensely emotional man," she said.

"I realized during that terrifying time that Steve was not enduring the pain for himself. He set destinations: his son Reed's graduation from high school, his daughter Erin's trip to Kyoto, the launching of a boat he was building on which he planned to take his family around the world and where he hoped he and Laurene would someday retire."

Even during Jobs's final moments, his life was measured in goals: The will to live, the will to survive on his terms: "His breath indicated an arduous journey, some steep path, altitude," Simpson described of Jobs' struggles during his last days.

"But with that will, that work ethic, that strength, there was also sweet Steve's capacity for wonderment, the artist's belief in the ideal, the still more beautiful later," she added.