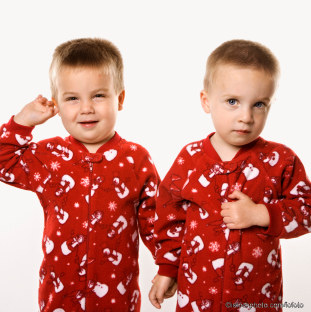 There is a story of identical twins. One was a hope-filled optimist. "Everything is coming up roses!" he would say. The other twin was a sad and hopeless pessimist. He thought that Murphy, as in Murphy's Law, was an optimist. The worried parents of the boys brought them to the local psychologist.

He suggested to the parents a plan to balance the twins" personalities. "On their next birthday, put them in separate rooms to open their gifts. Give the pessimist the best toys you can afford, and give the optimist a box of manure." The parents followed these instructions and carefully observed the results.

When they peeked in on the pessimist, they heard him audibly complaining, "I don't like the color of this computer . . I'll bet this calculator will break . . . I don't like the game . . . I know someone who's got a bigger toy car than this . . ."

Tiptoeing across the corridor, the parents peeked in and saw their little optimist gleefully throwing the manure up in the air. He was giggling. "You can't fool me! Where there's this much manure, there's gotta be a pony!"
--------
http://www.inspirationalstories.com/1/172.html
http://www.eduguide.org/education/article_images/istock_iofoto-3-twin-boy-toddlers-in-jammies-c.jpg
Posted by pratanacoffeetalk at 8:18 AM