A LESSON FROM KOBE EARTHQUAKE 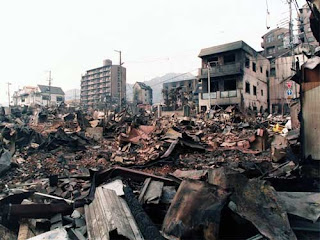 During the devastating earthquakes in Kobe, Japan, an American newscaster did a short piece on a Japanese woman who set up a makeshift store out of boxes selling flashlights and batteries. When the commentor asked why she wasn't selling these essential items for more than the regular price, the woman answered, "Why would I want to profit from someone else's suffering?"

Kobe is located in the south east of Japan, near a destructive plate margin. It is a megacity and has one of the largest container ports in the World.  Although further from a plate margin than most of the cities in Japan, Kobe is still found on a fault line.  The earthquake that hit Kobe during the winter of 1995 measured 6.9 on the Richter scale. At this plate margin, the Pacific plate is being pushed under the Eurasian plate, stresses build up and when they are released the Earth shakes. This is known as an earthquake happening along a subduction zone. The focus was only 16km below the crust and this happened on the 17th Jan 1995 at 5.46am. 10 million people live in this area.
--------
http://www.inspirationalstories.com/1/127.html
http://www.coolgeography.co.uk/GCSE/Year11/Managing%20Hazards/Earthquakes/070531_kobe_earthquake.jpg
Posted by pratanacoffeetalk at 8:37 AM