THE BOWL AND THE ROBE 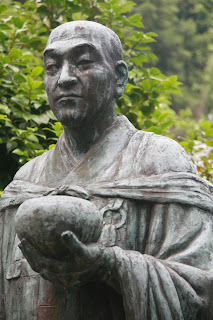 When he became emancipated the sixth patriach received from the fifth patriach the bowl and robe given from the Buddha to his successors, generation after generation.

A monk named E-myo out of envy pursued the patriach to take this great treasure away from him. The sixth patriach placed the bowl and robe on a stone in the road and told E-myo: “These objects just symbolize the faith. There is no use fighting over them. If you desire to take them, take them now.”

When E-myo went to move the bowl and robe they were as heavy as mountains. He could not budge them. Trembling for shame he said: “I came wanting the teaching, not the material treasures. Please teach me.”
The sixth patriach said: “When you do not think good and when you do not think not-good, what is your true self?”

At these words E-myo was illumined. Perspiration broke out all over his body. He cried and bowed, saying: “You have given me the secret words and meanings. Is there yet a deeper part of the teaching?”
The sixth patriach replied: “What I have told you is no secret at all. When you realize your true self the secret belongs to you.”

E-myo said: “I was under the fifth patriach for many years but could not realize my true self until now. Through your teaching I find the source. A person drinks water and knows himself whether it is cold or warm. May I call you my teacher?”

The sixth patriach replied: “We studied together under the fifth patriach. Call him your teacher, but just treasure what you have attained.”
-----------
http://www.inspirationalstories.com/do-not-think-good-do-not-think-not-good/
Posted by pratanacoffeetalk at 4:10 PM