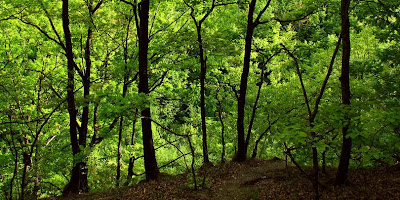 In the 1930s a young traveler was exploring the French Alps. He came upon a vast strech of barren land. It was desolate. It was forbidding. It was ugly. It was the kind of place you hurry away from.

Then, suddenly, the young traveler stopped dead in his tracks. In the middle of this vast wasteland was a bent-over old man. On his back was a sack of acorns. In his hand was a four-foot length of iron pipe.

The man was using the iron pope to punch holes in the ground. Then from the sack he would take an acorn and put it in the hole. Later the old man told the traveler, "I've planted over 100,000 acorns. Perhaps only a tenth of them will grow." The old man's wive and son had died, and this was how he chose to spend his final years. "I want to do something useful," he said.

Twenty-five years later the now-not-as-young traveler returned to the same desolate area. What he saw amazed him. He could not believe his own eyes. The land was covered with a beautiful forest two miles wide and five miles long. Birds were singing, animals were playing, and wild flowers perfumed the air.

The traveler stood there recalling the desolation that once was; a beautiful oak forest stood there now - all because someone cared.
-------
http://www.inspirationalstories.com/1/139.html
http://www.valcucine.it/img/uploads/Ecosustainability/13/13_oak%20forest.jpg
Posted by pratanacoffeetalk at 12:44 PM