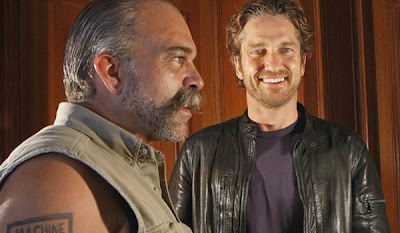 Reporting from Toronto —— A few years ago, director Marc Forster went to visit Sam Childers at his home in rural Central City, Pa., eager to learn about how a drug dealer became a preacher and then director of an orphanage in Africa. As a get-to-know-you activity, Childers took the Swiss filmmaker (who has a penchant for purple sneakers and pink-striped socks) into his backyard to shoot guns.

When screenwriter Jason Keller first met the outsized Childers, who has fought alongside the Sudan People's Liberation Army, Childers challenged his credentials so strongly the scribe rose from the table in a huff. Just as he was about to stalk off, Childers grabbed his arm and said: "I was just testing you.... Sit down. Let's keep talking," Keller recalls.

And when Gerard Butler made the pilgrimage to Central City, he sat down and Childers handed him a firearm. Childers neglected to tell the Scottish actor it was loaded until Butler started playing with it.

"Sam loves to test people. To challenge them and say, 'OK, what have you got?'" says Butler. "So handing me a loaded gun, to you and me, that might seem like a very dangerous and insane thing to do. To him, it's like making a cup of tea."

Forster, Keller and Butler passed the tests, and the result is the new film based on Childers' most unconventional life, "Machine Gun Preacher."

Childers' story is nothing if not cinematic. Act 1: He spends his youth running drugs, riding Harleys, packing heat and doing time. Act 2: In his 30s, he suddenly finds God, builds his own church and starts preaching himself. Act 3: On a mission trip to southern Sudan, he sees a child's body torn apart by a land mine. The searing experience inspires him to build an orphanage there — and to take up arms himself against the Lord's Resistance Army, a Uganda-based militia group notorious for mutilating, killing and conscripting children into its cult-like ranks.

The prime challenge of the film, a flawed hero's tale, is to capture Childers' duality — is he a man of God, a vigilante or both? — while straddling the line between real emotion and schmaltz. It's a tough balance to strike, especially considering how the subject matter makes grown men cry when they get to talking about it.

The movie, which opens in theaters Friday and stars Butler as Childers, premiered Sept. 11 at the Toronto International Film Festival, where it received a standing ovation. Childers was on hand to promote the film, decked out in full Harley-Davidson gear, from his brown sleeveless shirt to his black steel-toed boots.

He looked more out of place on the red carpet than you could imagine him feeling when he was first dropped onto the African plains and encountered the LRA, whose leader, Joseph Kony, has claimed he wants to install a Christian government in Uganda based on the Ten Commandments.

With a toothpick constantly wedged in his teeth and a Machine Gun Preacher tattoo filling up his right bicep, the 49-year-old Childers oozes hardened masculinity. But when he begins speaking about the children victimized by the LRA, all the tough-guy pretense falls away and his soulful brown eyes well up with tears.

"A lot of people don't think I've done right," Childers says, acknowledging his many critics, who fault him for using violence, period — even against people as reviled as LRA leaders (who have been charged by the International Criminal Court with crimes against humanity).

"Machine Gun Preacher" became a passion project for its writer, director and lead actor. Butler, best known as the star of "300," agreed to work for one-thirtieth of what he typically earns. Keller paid for his own research trips to Africa. Forster, director of "Finding Neverland" and "Quantum of Solace," made do with a $30-million budget, not a lot for a film shot on two continents over 51 days.

The intensity of the story gradually broke down Butler as he immersed himself in Childers' world. According to Forster, the 41-year-old actor carried a photo album around with him on the set in South Africa, constantly referencing pictures of children horribly disfigured by the LRA fighters who have been raiding and pillaging villages in the dead of night for more than two decades.

"By the end of the movie I wasn't in a good space," says Butler, getting misty-eyed.

The end credits of "Machine Gun Preacher" include clips of Childers defending his unconventional methods. "We wanted to bring this story back to 'reality' and illustrate that what everybody just witnessed actually lives and breathes," screenwriter Keller says.

The film itself hews closely to Childers' reality, though timelines are compressed and some characters were merged for the sake of storytelling. Childers says more than 70% of the film is true — especially its depiction of his younger years, when drugs and violence were the central aspects of his life.

"I cry every time I watch it, especially the first part when I was not a good person," says Childers. "There are things in that movie that I tried to block out — I started doing drugs when I was 11. I was a heroin addict. I sold drugs to my high school teachers — and now it's out there. None of that was fabricated."

As for the film's action sequences set in Sudan, which depict him fighting alongside militiamen battling the LRA, Childers says they were "amped up." Keller agrees, even as he defends the scenes. (Southern Sudan voted for independence from northern Sudan in a referendum earlier this year, but the conflict involving the LRA continues in the region.)

"Sam didn't dispute it. He understood what we were doing," Keller says. "The truth is that the guy absolutely has been in firefights with the LRA. He's had numerous attempts on his life including a sniper that almost shot him about a mile outside the gates of his orphanage.

"I interviewed numerous SPLA soldiers when I was over there, and many children who had seen war. All of them told me stories of battle far more intense and horrific than what we depicted in the movie," he adds. "So from my perspective, the 'action' accurately shows the brutality and violence that has plagued Sudan for 20-plus years."

"It doesn't really matter if people like or dislike the movie; they will be aware of the situation," Forster says. "For me this movie is about a man who had no means but took the power in his own hands to change people. He's not Gandhi. But whether you agree with it or not, he still put his life on the line to save kids. That alone for me was worth telling the story."