A SACK OF GRAIN 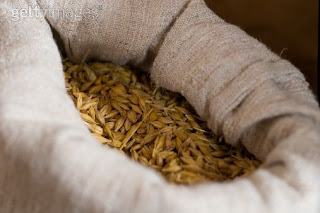 Two brothers worked together on the family farm. One was married and had a large family. The other was single. At the day's end, the brothers shared everything equally, produce and profit.

Then one day the single brother said to himself, "It's not right that we should share equally the produce and the profit. I'm alone and my needs are simple."

So each night he took a sack of grain from his bin and crept across the field between their houses, dumping it into his brother's bin.

Meanwhile, the married brother said to himself, "Its not right that we should share the produce and the profit equally. After all, I'm married and I have my wife and my children to look after me in years to come. My brother has no one, and no one to take care of his future."

So each night, he took a sack of grain and dumped it into his single brother's bin.

Both men were puzzled for years because their supply of grain never dwindled.

Then one dark night the two brothers bumped into each other.