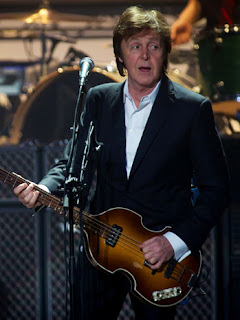 Paul McCartney first met Albert Maysles back in 1964 when Maysles and his brother David followed The Beatles during their first trip to America – from their frenzied arrival at JFK airport to their appearance on The Ed Sullivan Show in front of a theater full of screaming teenage girls. The result was the now-classic documentary What’s Happening! The Beatles in the U.S.A.

So when McCartney was participating in the benefit Concert for New York City in the wake of the terrorist attacks of Sept. 11, 2001, he rang up his old friend Albert (David Maysles died in 1987) to ask if he’d fancy shadowing him on a different kind of New York sojourn.

Albert Maysles, now 84, agreed immediately. That was in October 2001. But the footage sat in his archives until about a year ago when McCartney again reached out to Maysles to gently suggest that the tenth anniversary of 9/11 might be an auspicious time to dust it off.

“Paul wrote a beautiful hand-written note,” recalls Bradley Kaplan, Maysles' production partner and president of Maysles Films. “It basically said: I think it might be a good time to revisit the film. What do you think?”

The new result is The Love We Make – the title is a riff on the final lyrics on Abbey Road – which airs Sept. 10 at 9 p.m. on Showtime. 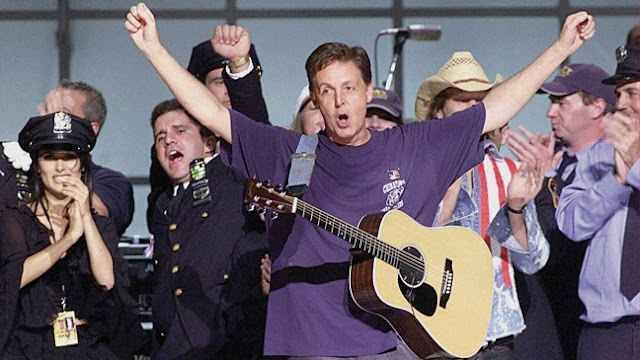 The documentary follows McCartney as he returns to Manhattan in October 2001 to perform and promote the concert. McCartney was on a runway at JFK waiting to fly back to the U.K. when the planes hit the Twin Towers. His flight was grounded and he watched the events of that day unfold on television. He returns to Manhattan in the days leading up to the Oct. 20 concert. When he gets out of his car to walk through the streets of a still traumatized Manhattan, fans and autograph seekers follow him, including a homeless man. He sits for interviews with former Access Hollywood co-host Pat O’Brien, Howard Stern and Dan Rather for a 60 Minutes II report. He rehearses with his band (with Billy Joel on the keyboards), reminisces backstage with a string of famous visitors including Eric Clapton, James Taylor and Bill Clinton. And in one particularly frenzied scene, he poses for a group photo-op in front of a crush of screaming photographers.

Like What’s Happening!, The Love We Make was shot on 16-milimetere black and white film, which was also McCartney’s idea.

“[It] lends the film the timelessness and gravitas that it deserves,” says Kaplan. “It doesn’t look like crummy video from a bygone era. It looks like a classic film. I’m really thrilled that Paul made that suggestion and really happy that Al shot it that way because we wouldn’t be able to fake that.”

Kaplan quickly realized what they had when he was going through Maysles’ archives shortly after he began working with him six and a half years ago.

“When I saw the footage for the first time, I realized what an incredible wealth of high quality, really moving and really meaningful footage there was,” he says. “And I said to Albert, ‘Gee, this is one of the great unseen, unfinished Maysles films.’”

Back in 1964, the Maysles were up and coming documentarians and The Beatles were superstars. McCartney explained that the band were fans of the Maysles cinéma vérité technique. “That was kind of happening in Europe at the same time it was happening in America,” he said recently at the Television Critics Association press tour. “So we loved the idea.”

When the band asked the Maysles, “What do you want us to do,” explained McCartney, “I think it was David who said, ‘We want you to just ignore us.’ So we thought that was the best piece of direction we’d ever received. ‘Oh, ignore you? Yeah, we can do that. I can ignore anyone.’”

So when McCartney called Albert Maysles almost 37 years later, he said: “We could just do it all again. You know, I’ll ignore you again and we can make a film.”

“In my first meeting with Paul, Paul said to us both, I’m trusting you to make a great film, but to make an authentic Maysles film, not a film for me or one that you think pleases me. But one that you firmly stand behind,” explains Kaplan. “We definitely did not sugar-coat, candy-coat or sweeten it. It is what it is. It’s not a puff piece. It’s not a self-aggrandizing piece. It’s a Maysles film.”
--------
http://www.hollywoodreporter.com/news/911-anniversary-paul-mccartney-documentary-showtime-231900
http://www.hollywoodreporter.com/news/paul-mccartneys-911-doc-premiere-213012
Posted by pratanacoffeetalk at 9:01 PM