DEAD SEA SCROLLS COME TO LIFE ON THE WEB (video) 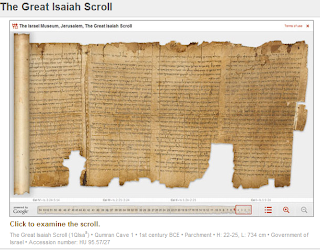 Discovered in 1947, the Dead Sea Scrolls have been available for viewing only in a museum in Israel...until now.

Thanks to some expert digital photography and a project set up by Google, high-resolution photos of five of the seven original Dead Sea Scrolls can now be seen online. Digital Dead Sea Scrolls Web site offers a peek into the distant past, allowing people to view and examine the scrolls in fine detail.

Photographed by digital photographer Ardon Bar-Hama, the images contain as many as 1,200 megapixels, according to Google, so that people can zoom in to get a detailed view of the historic manuscripts.

Opening the page for one of the scrolls, such as  The Great Isaiah Scroll, greets you with a description of the scroll, its history, and its meaning. Clicking on the photo of the scroll itself zooms in so that you can not only read the words but also feel the texture and age of the parchments themselves. Zooming it far enough even reveals some of the cracks, tears, and holes that have invaded the paper over the past 24 centuries.

You can easily scroll from one page to another or to a specific page. Hovering your mouse over any section of the parchment displays the specific verse you're reading. Clicking on that verse then provides an English translation of the ancient Hebrew text.

The scrolls are supposed to be searchable through Google's standard search engine, according to the company. Googling Dead Sea Scrolls followed by a specific verse should bring you to that verse's location in the photograph of the scroll. But when I tried this, I received just a series of standard search results with no link to the scroll.

The prospect of bringing the Dead Sea Scrolls to digital life came about last year when Google was asked to photograph the manuscripts  for a project with The Israel Museum in Jerusalem, home to the actual scrolls.

Concerns were naturally raised about the vulnerability of the scrolls to photography after having been exposed to light and air for so long. Using his own unique method for capturing sensitive documents, photographer Ardon Bar-Hama was able to take pictures of the scrolls in a quick one-shot process, thereby protecting them from long exposure to the elements.

Written sometime from the third century to the first century BCE (Before the Common Era), the seven scrolls were uncovered in a series of caves near the Dead Sea between 1947 and 1956. The scrolls themselves "offer critical insights into life and religion in ancient Jerusalem," according to Google, "including the birth of Christianity."