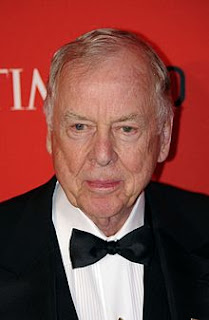 Thomas Boone Pickens, Jr. (born May 22, 1928), known as T. Boone Pickens, is an American financier who chairs the hedge fund BP Capital Management. He was a well-known takeover operator and corporate raider during the 1980s. With an estimated current net worth of about $1.4 billion, he is ranked by Forbes as the 328th-richest person in America and ranked 879th in the world.
-----