The Thing is an upcoming 2011 science fiction horror film directed by Matthijs van Heijningen Jr., written by Eric Heisserer, and starring Mary Elizabeth Winstead and Joel Edgerton in the lead roles. It is a prequel to the 1982 John Carpenter film of the same name. Matthijs's film will take place right before the first film, following the exploits of the Norwegian and American scientists who originally discovered the alien.

Antarctica: an extraordinary continent of awesome beauty. It is also home to an isolated outpost where a discovery full of scientific possibility becomes a mission of survival when an alien is unearthed by a crew of international scientists. The shape-shifting creature, accidentally unleashed at this marooned colony, has the ability to turn itself into a perfect replica of any living being. It can look just like you or me, but inside, it remains inhuman. In the thriller The Thing, paranoia spreads like an epidemic among a group of researchers as they're infected, one by one, by a mystery from another planet. 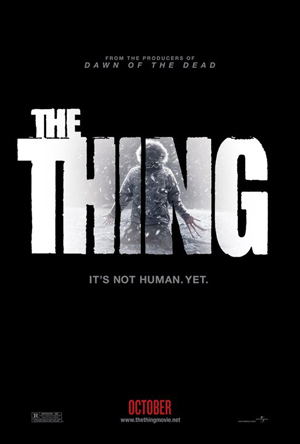 Taking place three days before the events of the John Carpenter film. Palaeontologist Kate Lloyd (Mary Elizabeth Winstead) has traveled to the desolate region for the expedition of her lifetime. Joining a Norwegian scientific team that has stumbled across an extraterrestrial ship buried in the ice, she discovers an organism that seems to have died in the crash eons ago. But it is about to wake up.

When a simple experiment frees the alien from its frozen prison, Kate must join the crew's pilot, Carter (Joel Edgerton), to keep it from killing them off one at a time. And in this vast, intense land, a parasite that can mimic anything it touches will pit human against human as it tries to survive and flourish.

The Thing serves as a prelude to John Carpenter's classic 1982 film of the same name.


“It’s a really fascinating way to construct a story because we're doing it by autopsy, by examining very, very closely everything we know about the Norwegian camp and about the events that happened there from photos and video footage that’s recovered, from a visit to the base, the director, producer and I have gone through it countless times marking, you know, there’s a fire axe in the door, we have to account for that…were having to reverse engineer it, so those details all matter to us ‘cause it all has to make sense.” Eric Heisserer describing the process of creating a script that is consistent with the first film.


Release
While the film was originally set to release in April, Universal Pictures changed the date to October 14, 2011,[34] to allow time for reshoots. The intention of the reshoots was to "enhance existing sequences or to make crystal clear a few story beats or to add punctuation marks to the film's feeling of dread."
----------
http://en.wikipedia.org/wiki/The_Thing_(2011_film)

Posted by pratanacoffeetalk at 12:42 PM