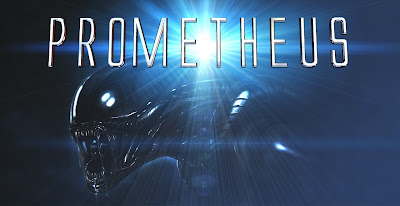 SAN DIEGO — Ridley Scott is coming back to science fiction after a quarter century, and we’ve just seen our first glimpse of his new film Prometheus. The good news is, it’s intense, sweaty, scary and beautiful — and intended to scare your pants off.

Here in Comic-Con’s Hall H, we saw a special featurette about Scott’s new alien movie. The featurette starts with a medley of past Scott films, and then the title card, “RIDLEY SCOTT RETURNS TO THE GENRE HE REDEFINED, WITH AN ORIGINAL SCIENCE FICTION EPIC PROMETHEUS.” At first, you see Scott standing in a studio, and then in a big open space with weird ribs on the walls, and Scott says, “So here we are, I’m back again.” He explains that it’s a James Bond studio (Pinewood) and he could fit seven and a half jumbo jets in here.

And then the actual footage from the film starts, and its a huge flood of creeptastic imagery that recalls Alien but also a bit of 2001: A Space Odyssey. There are guys in pressure suits exploring an ancient chamber with weird hieroglyphs, and a guy in a spacesuit walking through a sliding door into a clean white chamber. And a guy (who might be Michael Fassbender) pulling a weird jelly-looking thing out of a canister. And as Scott’s voiceover notes that things that may look small in the film will turn out to be important, there is a shot of a drop of blood on a finger. There is Charlize Theron on a table with bandages wrapped around her breasts, as though she’s waking from hypersleep.

And then the footage gets faster and more furious, with a guy in a visor looking down at something, a woman in a suit walking into a red entryway, and a globe, and then Scott says, “The cast find an establishment which is not what they expected it to be, it’s a civilization but what we find in it is very uncivilized behavior.” And then there is insane carnage and people with goop inside their space helmets and someone shooting a flamethrower, and mayhem breaking loose in confined spaces. Meanwhile, Scott’s voiceover is saying that there will be biomechanoids and the film will “break new ground.” We see a giant pale planet with rings around it.

And then we see Charlize Theron doing pushups naked. Says Scott in the video, “There is a DNA of the original Alien, [but] that’s as far as it goes, everything else is completely different. It’s all about everything.” And now the people in the footage are crying and screaming and freaking out and the video is flickering like an interrupted signal. And Scott concludes, “Of course, what I want to do is scare the living shit out of you.”

Damon Lindelof, who was moderating the panel, talked about getting the call from Scott asking him to work on this movie, and the long process of the two of them sitting across the table from each other hashing out this movie. At first, the “$64,000 question” was whether this was an Alien prequel, but eventually they moved past that.

Theron came out on stage and talked about how the script had seemed really rough when she first came on board, and she worked with Scott and Lindelof to improve it. Theron plays Meredith Vickers in the film, and she described her character:

“She’s very different from anything I’ve done. She’s a suit, essentially. She’s kind of the machine that runs the machine, that takes this mission into space. At first, she comes across like a suit, very cold and frigid, it seems that it’s all about the economics for her — she doesn’t really come from one side or the other, she’s not a scientist or a believer. She runs a tight ship. But you can tell that she’s going to be a problem. And then later…. We had all kind of layered her and given her [hidden depths]. You think you know who she is [but she's an enigma]. Ridley started doing this interesting thing, where he would have me stand in corners and lurk all the time, and it wound up being really mysterious. In the third act, you really kind of strip her from her skin and see what her bones are about, and what she’s really doing there.”

And then we were patched into Scott and star Noomi Rapace via live video feed — Scott is in Iceland, near a waterfall, where he’s just been doing the final bit of filming for a sequence at the start of the movie.

Scott explained why he stayed away from science fiction for 25 years:

“I was actually too busy doing other movies and exploring other genres, so frankly I never actually thought about science fiction until I realized there was something in the first Alien movie that nobody had ever asked the question about … and I thought that could be the centerpiece of what we’ve just completed. That said, that is the only DNA loosely applied to the original Alien. We’ve gone in a different directions, but in the last few minutes of this movie you’ll see what I’m talking about.”

And Scott hinted that “there may be two robots in Prometheus,” not just the one android who’s rumored to be in the film. He added: “I think robots and androids and Replicants have become so much part of the actual science fiction scenario and landscape, that they’re no longer unique. [So] you’ve got to come up with those unique notions that make something fresh.”
----------
http://www.wired.com/underwire/2011/07/prometheus/
http://media.comicbookmovie.com/images/uploads/Prometheus_Ridley_Lindelof.jpg
http://collider.com/wp-content/uploads/prometheus-image.jpg
http://www.filmireland.net/wp-content/uploads/2011/08/ridley_scott_1543382c.jpg
Posted by pratanacoffeetalk at 9:39 AM