THE NEW "SUPERMAN": MAN OF STEEL

Look! Up on the Web! It’s a bird! It’s a plane! It’s Henry Cavill as Superman! 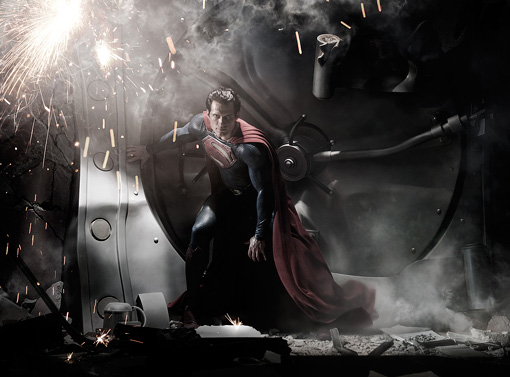 Our thoughts: A classic, retro-flavored Man of Steel, filtered through Snyder’s techno-sleek, hyper-pop aesthetic; somewhere between the drama of the Christopher Reeve Superman and the more subdued Brandon Routh Superman. The shield on the chest is thick and BIG. They ain’t shying away from that “S” this time, are they? The crimson cape is long and flowing, made of thick fabric. Look forward to seeing it unfurled and billowing when Supes goes soaring through the sky. The suit: tight, textured, muted blue. I love the wrinkles at the wrist. The boots are red. Cool belt buckle. But is he wearing the red underwear? Hard to tell from the strategically placed shadows. (BTW: Superman is losing his undies in his forthcoming comic book relaunch. Check out the pic here.) Cavill radiates an all-business, decidedly adult visage. The posture is telling. Often when we get “hero shots” of Superman, we see him standing tall and upright, chest out and puffed, hands balled into fists and at the waist, eyes looking toward the horizon. Yet this Man of Tomorrow is meeting our gaze, confident and defiant. Hunched and coiled, a hint of bad-ass Batman in him, he looks like a wrestler ready to rumble or a brawler ready to charge, which again harkens back to the original, pulp hero conception of the character created by Joe Shuster and Jerry Siegel. One question: Where’s the curl? Bottom line: A steely cool Superman; a meaty tease in advance of clearer, cleaner pics to come.

Snyder is now shooting Man of Steel in Chicago with a cast that also includes Amy Adams, Laurence Fishburne, Kevin Costner, Diane Lane and Michael Shannon. The movie –produced by Christopher Nolan and written by David S. Goyer — is scheduled for release June 14, 2013.
---------
http://insidemovies.ew.com/2011/08/04/first-look-superman/
http://fusible.com/wp-content/uploads/2011/07/Man-of-Steel-logo.jpg
Posted by pratanacoffeetalk at 10:30 PM