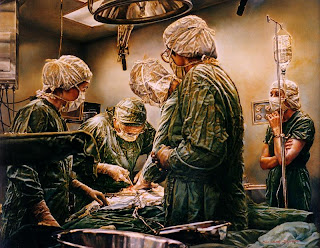 There was once an ambitious young lad who had always dreamt that one day he would become a general in the army. He was intelligent, and the qualities he possessed were more than enough to get him anywhere he wanted. For this he thanked God whom he feared and always prayed that one day his dream would be fulfilled.

Unfortunately when the time came for him to join the army, he was rejected due to the fact that he was flat-footed. After various attempts he gave up the idea of ever becoming a general, and for this he blamed God for not answering his prayer.


He felt alone, emotionally beaten, and most of all with an anger he had never experienced before. An anger which he started projecting against God. He knew that there was a God but did not believe in God as a friend any more but in God as a tyrant. He never prayed anymore and never put step in Church again. When people used to speak about the All Loving God he used to pull their legs and asking intricate questions which would leave the believer perplexed.

He than decided to enter university and become a doctor. And so happened, he became a doctor and some years later he was a qualified surgeon. He became a pioneer in delicate operations where the patient did not stand a chance of surviving if not under the hands of this young surgeon. Now all his patients had a chance, that of a new life.

Throughout the years he saved thousands of lives, those of children and adults. Parents could now live happily with their re-born son or daughter and mothers who were critically ill could now still love their family. Fathers who were devastated because no one could raise their family after their death, had been given another chance.

As he grew older he trained other aspiring surgeons on his new operating technique and more and more lives were saved and are still being saved.

One day he closed his eyes and went to meet the risen Lord. There still full of hatred the man asked God why his prayers were never answered and the Lord answered.

"Look out in the skies my child and see your dream fulfilled."

There he could see himself as a young boy praying to become a soldier. He saw himself getting into the army and becoming a soldier. There he was proud and ambitious, and with a look in his eyes that one day he would lead a whole regiment. He was called to fight his first battle, but as he was in a camp at the front, a bomb fell and blasted him off. He was then sent in a wooden box back to his family.

All his ambitions were now shattered as his parents wept and wept.

Then the Lord said, "Now look how my plan has been fulfilled although you did not approve."

Once again he looked in the skies. There he watched his life day by day and how many lives he had saved. He saw the smiles on his patient's faces and on their family's faces and the new life he had given them by becoming a surgeon.

At that point he knew that the Lord was always with him. He understood how God had used him as His instrument to save thousands of lives and to give a future to the young boy who wanted to become a soldier.