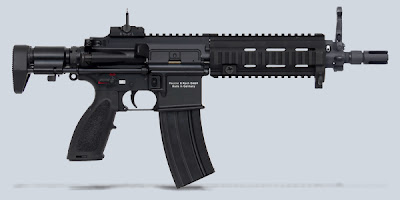 "I've just heard from a SOCOM vet," says Military Times "He tells me the stack of SEAL assaulters from Red team that went through Osama bin Laden's bedroom door were running HK416s."

Soldier Systems adds that bin Laden "was gunned down using German engineering – the HK416 which was my gut feeling from the very beginning."

A Whispers source close to the SEAL community said that the reports are "kosher for sure." He adds that it's likely the commandos had a collection of different weapons and might have also been carrying a rifle with a shorter barrel.

HK, which didn't have any immediate comment, describes the gun on its website as the perfect SEAL weapon: it shoots an effective 5.56 mm round, has a gas system that doesn't foul the weapon like some other rifles, can shoot 20,000 rounds with "minimal degradation of accuracy," and fires just fine after being submerged in water and not completely drained.

The HK416 is an assault rifle designed and manufactured by Heckler & Koch. It is a modified version of the American M4 carbine with many changes, most notably a new gas operating system from the Heckler & Koch G36. Customers have the option of purchasing a new upper receiver, buffer and drive spring to refurbish M4s or buying a completely new build HK416.

The United States Army's Delta Force collaborated with the German arms maker to develop the new carbine. During development, Heckler & Koch capitalized on experience gained developing the Bundeswehr's Heckler & Koch G36 assault rifle, the US Army's XM8 rifle project (canceled in 2005) and the modernization of the British Armed Forces SA80 small arms family.[citation needed] The project was originally called the HK M4, but this was changed in response to a trademark infringement suit filed by Colt Defense.

Delta Force replaced its M4s with the HK416 in 2004 after tests revealed that the piston operating system significantly reduces malfunctions while increasing the life of parts. The HK416 has been tested by the United States military and is in use with some law enforcement agencies and special operations units. It has been adopted as the standard rifle of the Norwegian Armed Forces as well.

A modified variant is undergoing testing by the United States Marine Corps as the M27 Infantry Automatic Rifle. After the Marine Corps Operational Test & Evaluation Activity supervised a round of testing at MCAGCC Twentynine Palms, Fort McCoy, and Camp Shelby (for dust, cold-weather, and hot-weather conditions, respectively), limited fielding began for 458 IARs to four infantry battalions (one per each Marine Expeditionary Force and one reserve) and one light armored reconnaissance battalion; all are slated to deploy to Afghanistan in 2011.

The HK416 is a modified variant of the American carbine, the M4. It includes international symbols for Safe, Semi-Automatic, and Fully automatic, a redesigned retractable stock which allows the user to rotate the butt plate, a new pistol grip designed by H&K, made to more ergonomically fit the hand and, attached to the rifle is a new single-piece hand guard with a free floating RIS system, used for mounting accessories. The most notable internal difference is the short stroke gas piston system, derived from the HK G36. To compensate for increased pressure due to the new gas system, a thicker barrel was also integrated. Finally, the HK416 includes a folding front sight, and a rear sight similar in design to the G3. The HK416 system is offered as an upper receiver, separate from the rest of the rifle, as a replacement to the standard issue M4 upper receiver. It can be attached to any existing AR-15 family rifles, giving them the new gas system, the new hand guard, and sights, while retaining the original lower receiver. The Heckler & Koch 416 can also be purchased as a fully assembled, stand alone carbine. 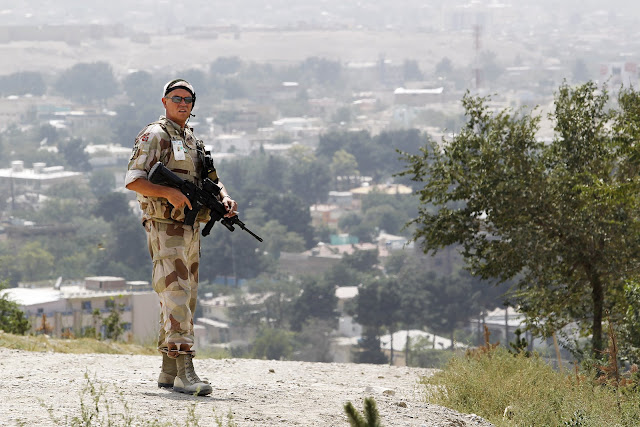 Posted by pratanacoffeetalk at 9:37 AM