CLIMATE IS A MAJOR VIOLENCE TRIGGER 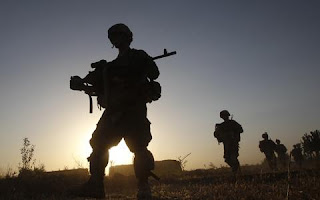 A new study in the journal Nature finds that war is associated with global climate.

Researchers from Princeton University and the Earth Institute at Columbia University focused on the natural climate cycle known as El Nino Southern Oscillation, or ENSO. This periodic warming of Pacific Ocean waters occurs every three to five years - alternating with cooling periods known as La Nina.

The authors tallied some 234 conflicts across 175 countries in Africa, the Middle East, South East Asia, South Pacific and the Americas where more than 25 people were killed in a given year. Half the conflicts caused more than 1,000 battle-related deaths.

Lead author and Princeton University researcher Solomon Hsiang says the work is the first to document a correlation between climate and civil unrest on a global scale in modern times.  “When we went back and looked through the data since 1950 approximately one-in-five civil conflicts were influenced by El Nino.”

That's double the rate of conflict in La Nina years.

Hsiang didn’t expect the magnitude of the effect to be so large. “What it really says is that not only does the climate affect conflict, it’s a major factor in determining global patterns of violence.”

The study does not suggest that climate alone triggers war. But, Hsiang says, combined with other factors it can deliver the final blow.
“It’s very important to remember that political situations, social situations, economic conditions are all very important to the onset of organized violence. But what we are finding is that those things when combined with climatic changes seem to make violence more likely.”

Halvard Buhaug, an expert on security and climate issues at the Peace Research Institute in Oslo, Norway, says the correlation between climate and conflictis credible. But he adds that if climate is driving violence, the study authors fail to explain why.
“I think it is imperative to demonstrate that food availability, food prices, crop production etc., very systematically with these ENSO cycles in areas where we do observe conflict that are sensitive to the ENSOs. Unless we are able to establish that connection, I think it’s too early to claim a causal relationship here.”

Solomon Hsiang agrees. He says the strong association between climate and conflict deserves more study. “Now what we’re doing is we’re pulling together new datasets and we’re doing additional research to try and dig deeper and figure out what are the underlying mechanisms that are really producing this result.”

Forecasters can now predict with greater certainly an El Nino or La Nina cycle two years in advance. Hsiang says the results could have important implications for agriculture and relief services.
“If governments, international organizations or aid groups are able to use those forecasts, the forecasts of El Nino effectively, they might be able to either prepare populations on the ground or themselves prepare their own resources to be in a better situation when conflict breaks out.”

Hsiang believes that information needs to be taken seriously. He notes that forecasters were able to predict the current famine in the Horn of Africa two years ago, but not enough aid arrived in time to mitigate the human cost of the crisis.
-------
http://www.voanews.com/english/news/environment/Study-Climate-Cycles-Drive-Civil-Conflict-128462148.html
Posted by pratanacoffeetalk at 7:36 AM