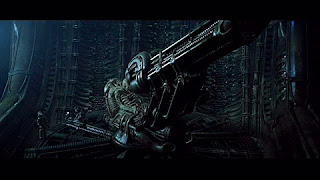 An Alien prequel that unspools the back story of the mysterious Space Jockey — the giant, fossilized creature with the burst-open chest from the first movie — is definitely going to happen, according to Ridley Scott.

“It’s fundamentally about going out to find out ‘Who the hell was that Space Jockey?’” the director told MTV News. “The guy who was sitting in the chair in the alien vehicle — there was a giant fellow sitting in a seat on what looked to be either a piece of technology or an astronomer’s chair.”

Scott, who’s polishing the script, drops even more details about the Alien prequel, which he calls a done deal in the enlightening interview: The movie will be set in 2085, will delve into the concept of terraforming and might even feature new concept artwork by the amazing H.R. Giger, Scott said.

And why is Scott, who has forsworn making sequels to his films, tackling the Alien prequel? “They’ve squeezed the franchise dry,” he told MTV. “The first one will always be the most frightening, because the beast we put together with Giger and all its parts — the face-hugger, the chest-burster, the egg — they were all totally original, and that’s hard to follow.”
----------
http://www.wired.com/underwire/2010/04/alien-prequel/
http://images.wikia.com/headhuntersholosuite/images/e/e9/Space_Jockey_001.jpg
http://evsmoviezone.files.wordpress.com/2011/07/space-jockey1.jpg
Posted by pratanacoffeetalk at 9:25 AM