WORLD POPULATION WILL HIT 7 BILLION IN THIS LATE OCTOBER 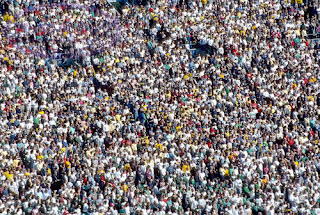 According to current projections, and with some of the world's poorest nations doubling their populations in the next decade, the second milestone will be in 2025 when the global population will reach eight billion.

"It will engage people on what it means to live in a world with seven billion people and encourage action on issues that affect all of us," he said.

Together, he said, "we can forge the future with young people, advance rights for girls and women, and safeguard the natural resources on which we all depend."

The rise in population is expected to have a devastating impact on some 215 million women who want - but do not have - access to quality reproductive health and family planning services.

Tamara Kreinin, executive director of Women and Population at the UN Foundation, said: "With the world's population poised to cross the seven billion mark in October 2011 and continue to grow over several more decades, this unmet need is only likely to increase."

She said the quality and availability of family planning services is instrumental in interrupting the inter-generational cycle of poverty and creating stronger, more stable families and communities.

Investing in voluntary family planning programmes gives women the tools to make critical decisions about the size of their families and spacing of their pregnancies, she noted.

Kreinin said meeting the need for family planning would result in a 32 per cent decrease in maternal deaths, and reduce infant mortality by 10 percent.

"Together, we can meet the needs of some 215 million women in developing countries who want to plan and space their births but do not have access to modern contraception," he said. "Together, we can prevent the deaths of 1,000 women every day from complications of pregnancy and childbirth."

He said there is also an opportunity and responsibility to invest in the world's 1.8 billion adolescents and youth aged 10 to 24.

They constitute more than a quarter of the world's population and almost 90 per cent live in developing countries.

"Every young person deserves education, including sexuality education, and access to comprehensive health services," he noted.

With the right policies, investments and social support, young people can enjoy healthier lives free of poverty and enhance prospects for peace and stability, he added.

"As the most interconnected population, young people are already transforming society, politics and culture. By more actively engaging women and young people, we can build a better future for all generations," Dr Osotimehin declared.

A new study titled Africa's Demographic Multiplication, released last month and commissioned by the Washington-based Globalist Research Center, points out that Africa's population has more than tripled during the second half of the 20th century, growing from 230 million to 811 million.

As a result, Africa has become more populous than Europe. Nigeria, Africa's most populous country at 158 million, is expected to grow to 730 million by century's end, making it larger than Europe's projected population of 675 million.

Nigeria is currently the only African country with a population exceeding 100 million.

But 10 other countries in the African continent are expected to join that club before the close of the century: the Democratic Republic of Congo (DRC), Egypt, Ethiopia, Kenya, Malawi, Niger, Sudan, Tanzania, Uganda and Zambia.

Jose Miguel Guzman, chief of the UNFPA's Population and Development Branch, said that globally, the population growth rate is not as high as it has been in the past.

Fertility decline in most countries of the world has contributed to a decline in population growth rates.

"But if we take into consideration least developed countries (LDCs) or most of the sub-Saharan countries, the situation is quite different," Guzman said.

In most of these countries, he said, fertility is still high, and the rate of growth is also high.

In some cases, it is as high as three percent, which implies that the population in these areas will double in about 20 to 25 years.

The date for the eight billion population milestone is projected now to be 2025, he predicted.

Kreinin said that in many countries, every dollar spent on voluntary family planning saves at least four dollars that would otherwise be spent treating complications arising from unplanned pregnancies.

Despite the low cost and many benefits of voluntary family planning, world leaders have not placed a priority on its funding.

Emerging countries are spending about half of what they pledged at the historic 1994 International Conference on Population Development (ICPD) for reproductive health spending, while developed countries, including the US, have provided less than a quarter of the promised spending, she added.

She said US investment in international family planning has traditionally been strong, but support peaked in 1995 and has declined significantly since.

Although in nominal terms funding has recovered in recent years, Kreinin said, it still remains 40 per cent below peak funding levels when adjusted for inflation, even as the unmet need continues to grow.
----------
http://english.aljazeera.net/indepth/features/2011/07/2011710162618890349.html
http://www.clevelandleader.com/files/billions-of-people.jpg
Posted by pratanacoffeetalk at 2:20 PM