CARMAGEDDON: WORKING TOGETHER TOWARD SOLUTION 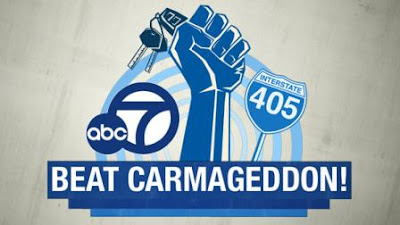 Interstate 405 is currently being widened in a 10-mile stretch through the Sepulveda Pass between I-10 and Ventura Boulevard, along with adding a new carpool lane and reconstructing the Mulholland Bridge. This project will require the freeway to be completely closed from Friday evening, July 15, through early Monday morning July 18, 2011, so demolition work on the Mulholland Bridge can be done.

Local radio DJs and television newscasts have referred to the shut down as "Carmageddon," a neologism for the event parodying the notion of Armageddon, and "Carpocalypse," a neologism parodying the notion of the Apocalypse. JetBlue seized on the freeway closure as a marketing and promotion opportunity, offering flights between the Bob Hope Airport in Burbank and the Long Beach Airport, a distance of only 29 mi (47 km), for $4.


There is also a proposal to make improvements on the adjacent Manchester and Century Boulevard interchanges in Inglewood to ease congestion, especially since they provide access from the 405 to LAX. CalTrans has not yet issued a proposed date to begin the plan. 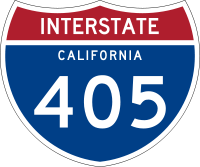 With the weekend shutdown of one of the busiest stretches of freeways in the U.S. just hours away, Los Angeles is doing what the city does best – making the closure a Hollywood-style event.

Dubbed long ago as “Carmageddon,” the 53-hour closure of 10 miles of Interstate 405 begins Friday some time around 7 p.m. and is scheduled to end Monday at 5 a.m.

Early Friday morning, media vans from every major news station lined the sides of this stretch of freeway that normally accommodates a half-million cars on any given weekend. But the hype started long ago.

Last month, the Los Angeles Police Department asked celebrities to join in its public service announcement strategy by tweeting the news of the closure to their fans.

Ashton Kutcher was the first celebrity to oblige more than two weeks ago. “LAPD askd me 2tweet: 405fwy btwn 10 & 101 will b closed July16-17. In xchange I would like a free pass on that stoplight tickt IT WAS YELLOW.”

Paris Hilton tweeted: “Hey LA, who's scared of Carmageddon? I'm not leaving my house to drive anywhere this weekend."

Hollywood newcomer actress Khaneshia Smith referred to the fact that many will stay at home and do nothing. She tweeted: “Everyone is forced to respect the Sabbath #carmaggedon.” 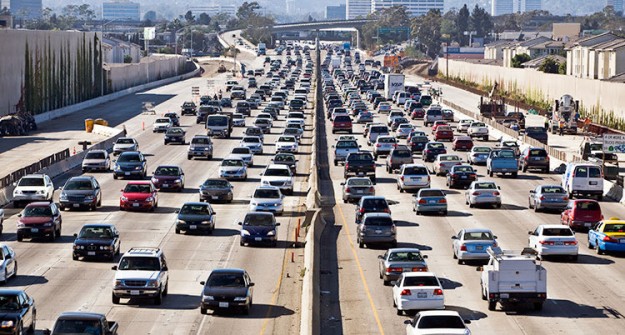 “It would be so ironic if Armageddon happened during Carmageddon," tweeted Office star Rainn Wilson.

Businesses in Los Angeles have restructured their normal weekend advertising campaigns to fit this very moment. Many businesses are offering “Carmageddon Specials.”

JetBlue offered Long Beach to Burbank flights, bypassing the 405 altogether, for $4. The flights were quickly sold out. O'Neill, a sportswear store in Santa Monica, is offering a 40.5 percent off sale.

Hotels and resorts are also running hot with specials and discounts tied into the Carmageddon theme. Travel and Leisure reports that Terranea, in Rancho Palos Verdes, is “offering refugees of the shutdown” a third night for 40.5 percent off the rack rate with their “405 Freeway Package.”

Fairmont Miramar Hotel & Bungalows in Santa Monica has a “Live Like a Local” package (overnight parking included) with rates from $405 a night. Booking two nights this weekend at the Hotel Palomar, in Westwood gets you $40.05 in dining credits and free parking. 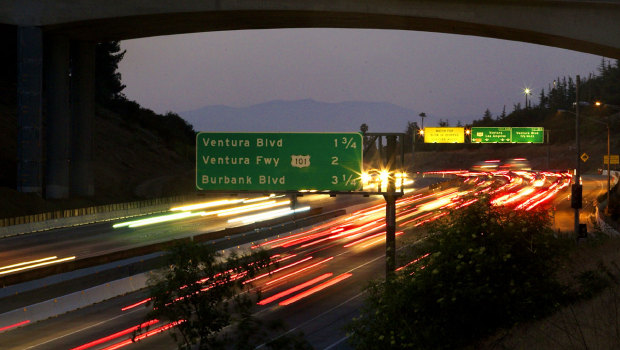 The closure takes place between Interstate 10 and U.S. 101, where freeway crews will add a carpool lane and demolish half of the Mulholland Bridge at the top of Sepulveda Pass. The question remains in Southern California as to whether a total commuter meltdown will occur.

"One of our interesting mysteries as transportation researchers is that traffic just disappears,” USC professor Gen Giulano told ABC’s Los Angeles station. “Sometimes, we don't know where it goes. In the case of the 10 (section of L.A. freeway once shut down for three months), people chose alternate routes but they also just avoided the area. Again, they just adapted their travel to be able to avoid the worst of what they were thinking would happen."

Perhaps FOX News Los Angeles reporter Phil Shuman, who has been reporting on the scene all week, summed it up best on the station's news show Friday morning. "We just don't know," Shuman said.