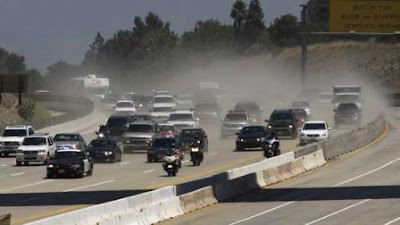 A major Los Angeles freeway construction shutdown and breathless warnings of ''Carmageddon'' gridlock were in the rearview mirror Monday morning for motorists heading into the four-hour commuter rush.

"This weekend was more of a `Carmaheaven' than a Carmageddon," Mayor Antonio Villaraigosa said in a statement.

The 10-mile freeway stretch linking the San Fernando Valley and the Los Angeles Westside was shut down Friday night for what was supposed to be a project ending at dawn Monday.

But crews finished early and the freeway reopened on Sunday, 17 hours ahead of schedule.

Officials were optimistic next year's sequel -- removal of the other half of the bridge -- will run just as smoothly.

Drivers led by California Highway Patrol officers honked their horns and waved from car windows as traffic started moving in all 10 lanes of the 405 just after noon Sunday.

Villaraigosa praised contractors for working so quickly and thanked city residents for heeding calls to stay off the roads. He also gave credit to news outlets for spreading word about the closure, which had been planned to last for 53 hours.

"I'd like to thank all Angelenos for heeding the call and staying in their neighborhoods," Villaraigosa said. "Thanks to their patience and cooperation, the city's roads and highways were practically empty.

Crews finished demolition work on the bridge early Sunday, toppling two massive pillars and creating about 4,000 tons of rubble to be removed.

For months, authorities had warned that a domino effect could paralyze much of Los Angeles, and signs warning drivers about the closure appeared as far away as the San Francisco Bay Area.

But officials said during the closure there were 65 percent fewer automobiles on freeways in the LA metro area than an average weekend.

"It took me actually less time to get to work than it would have on a normal weekend," said Jenn Tanaguchi, a hairstylist who has to drive from downtown to her job at a salon in Brentwood. "People were telling me that I would have to leave two hours early."

The reopening attracted a few onlookers to a parking lot above the freeway. Albert Hill, 47, a Westwood resident, brought his three-year-old son to take photos of the empty lanes and the first cars to return to the 405.

"This is a historic moment for me. I've lived here my whole life, so to see it closed down, I thought it could never happen," Hill said. Project contractor Kiewit Infrastructure West could have been fined a $72,000 an hour for delay in getting the freeway reopened, according to the city's Metropolitan Transportation Authority.

Powerful machines with long booms hammered away at the south side of the half-century-old Mulholland Bridge, which was removed to allow construction of an additional freeway lane. The plan is to leave the north-side lanes standing until the south side is rebuilt.

Another closure will be required in about 11 months to demolish the rest.

Officials said they were hopeful that the future shutdown would run just as smoothly as this one, but questions loomed over whether commuters would again heed dire warnings about massive traffic after the weekend went so smoothly.

Ira Vitug, 27, who works for a mortgage company in Calabasas, said she was already anxious for phase two, and for the entire project to be done. "Glad it's over and ready for the next," she said. "Bring it on!"

The project picked up its apocalyptic name when Los Angeles County Supervisor Zev Yaroslavsky said at an early June news conference that "this doesn't need to be a Carmageddon" if people avoided driving.

On Sunday, Yaroslavsky jokingly dismissed the phrase that took on a life of its own. "Carmageddon, Shmarmageddon!" he declared.

"I think people in L.A. have learned that you can get along without having to take long car rides on a weekend," the supervisor said.

"I think everyone has realized that we can get out of our cars once in a while and survive," Villaraigosa said.
-----------
http://abclocal.go.com/wls/story?section=news/national_world&id=8256420
Posted by pratanacoffeetalk at 8:43 PM