THE ADVENTURE OF TINTIN: SECRET OF THE UNICORN (video) 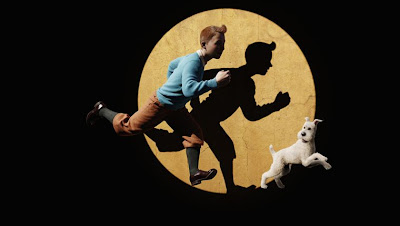 The Adventures of Tintin: Secret of the Unicorn is an upcoming 2011 American performance capture 3D film based on The Adventures of Tintin, a series of comic books created by Belgian artist Georges "Hergé" Remi. It is directed by Steven Spielberg, produced by Peter Jackson, and written by Steven Moffat, Edgar Wright and Joe Cornish. The script is based on three of the stories: The Crab with the Golden Claws, The Secret of the Unicorn and Red Rackham's Treasure. 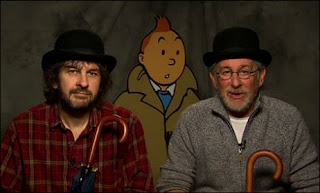 Spielberg first acquired rights to Tintin after Hergé's death in 1983, and re-optioned them in 2002. Filming was due to begin in October 2008 for a 2010 release, but release was delayed to 2011 after Universal opted out of producing the film with Paramount, who provided $30 million on pre-production. Sony chose to co-produce the films. The delay resulted in Thomas Sangster, who had been cast as Tintin, departing from the project.

The Adventures of Tintin will be the first animated movie directed by Spielberg. Although Spielberg is not completely unfamiliar with digital cinematography, the director has firmly stated that he still prefers working with film. 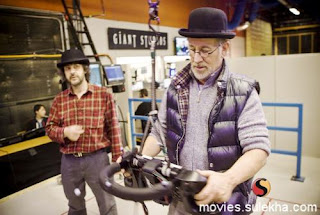 Combining the stories of The Crab with the Golden Claws, The Secret of the Unicorn and Red Rackham's Treasure, the film depicts Tintin's (Jamie Bell) first encounter with Captain Haddock (Andy Serkis) and the discovery of a clue to the treasure of his ancestor Sir Francis Haddock. They set out to find it with protection from a prison escapee who tried to get the treasure as well as Detectives Thompson and Thomson (Simon Pegg and Nick Frost).

DEVELOPMENT
Spielberg has been an avid fan of The Adventures of Tintin comic books, which he discovered in 1981 when a review compared Raiders of the Lost Ark to Tintin. His secretary bought him French-language editions of each book, but Spielberg did not have to understand them: he immediately fell in love with its art. Meanwhile, the comics' creator Hergé, who didn't like the previous live action film versions and the cartoon, became a fan of Spielberg. Michael Farr, author of Tintin: The Complete Companion, recalled Hergé "thought Spielberg was the only person who could ever do Tintin justice". Spielberg and his production partner Kathleen Kennedy of Amblin Entertainment were scheduled to meet with Hergé in 1983 while filming Indiana Jones and the Temple of Doom in London. Hergé died that week, but his widow decided to give them the rights. A three-year long option to film the comics was finalized in 1984, with Universal as distributor.

Spielberg commissioned E.T. the Extra-Terrestrial writer Melissa Mathison to script a film where Tintin battles ivory hunters in Africa. Spielberg saw Tintin as "Indiana Jones for kids" and wanted Jack Nicholson to play Haddock. Unsatisfied with the script, Spielberg continued with production on Indiana Jones and the Last Crusade. The rights returned to the Hergé Foundation. Claude Berri and Roman Polanski became interested in filming the property, while Warner Bros. negotiated long and hard for the rights, but they could not guarantee the "creative integrity" that the Foundation found in Spielberg. In 2001, Spielberg revealed his interest in depicting Tintin with computer animation. In November 2002, his studio DreamWorks reestablished the option to film the series. Spielberg said he would just produce the film. In 2004, the French magazine Capital reported Spielberg was intending a trilogy based on Secret of the Unicorn / Red Rackham's Treasure, The Seven Crystal Balls / Prisoners of the Sun and The Blue Lotus / Tintin in Tibet (which are not a single story, but both feature the Chang Chong-Chen character). By then, Spielberg had reverted to his idea of a live-action adaptation, and called Peter Jackson to ask if Weta Digital would create a computer-generated Snowy. 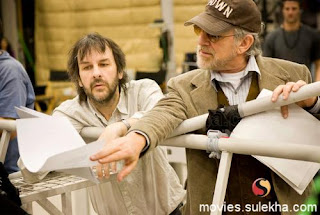 Jackson, a longtime fan of the comics, had used motion capture in The Lord of the Rings and King Kong. He suggested that a live action adaptation would not do justice to the comic books and motion capture was the best way of representing Hergé's world of Tintin. A week of filming took place in November 2006 in Playa Vista, Los Angeles, California, on the stage where James Cameron shot Avatar. Andy Serkis had been cast, while Jackson stood in for Tintin. Cameron and Robert Zemeckis were present during the shoot. The footage was transmitted to Weta Digital, who produced a twenty-minute test reel that demonstrated a photorealistic depiction of the characters. Spielberg said he would not mind filming it digitally because he saw it as an animated film, and reiterated his live action work would always be filmed traditionally. 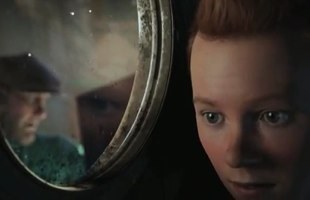 “We're making them look photorealistic; the fibres of their clothing, the pores of their skin and each individual hair. They look exactly like real people – but real Herge people!”, Peter Jackson explains the film's look

An official announcement about the collaboration was made in May 2007, although both filmmakers had to wait to film it: Spielberg was preparing Indiana Jones and the Kingdom of the Crystal Skull and Jackson was planning The Lovely Bones. In October 2007, Steven Moffat was announced as having signed on to write the screenplays for two of the Tintin films. Moffat said he was "love bombed" by Spielberg into accepting the offer to write the films, with the director promising to shield him from studio interference with his writing. Moffat finished the first script, but could not complete the second because of the 2007–2008 Writers Guild of America strike. He then became executive producer of Doctor Who, leading Spielberg and Jackson (the latter of whom is a fan of the show) to allow him to leave and fulfil his duty to the series. Edgar Wright and Joe Cornish rewrote the script.

More filming took place in March 2008. But in August 2008, a month before principal photography would have begun, Universal turned down their option to co-produce the film, citing the low box office of Monster House and Beowulf as well as the directors' usual request for 30% of the gross. Paramount Pictures (DreamWorks' distributor) had hoped to partner with Universal on the project having spent $30 million on pre-production. Spielberg gave a ten-minute presentation of footage, hoping they would approve for filming to begin in October. Paramount offered to produce if the directors opted out of their gross percentage deals: Spielberg and Jackson declined, and negotiated with Sony to co-finance and distribute the first film by the end of October. Sony only agreed to finance two films, though Jackson said a third film may still happen. 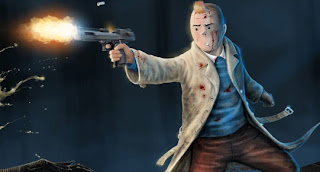 Filming began on January 26, 2009, and the release date was moved from 2010 to 2011. The budget is $US 135 million. Spielberg wrapped his film – after 32 days of shooting – in March 2009. Jackson was present for the first week of filming and supervised the rest of the shoot via a specially made iChat videoconferencing program. Simon Pegg said Jackson's voice would "be coming over the Tannoy like God." During filming, various directors including Guillermo del Toro, Stephen Daldry and David Fincher visited. Spielberg would try to treat the film like live-action, moving his camera around. He revealed, "Every movie I made, up until Tintin, I always kept one eye closed when I've been framing a shot," because he wanted to see the movie in 2-D, the way viewers would. "On Tintin, I have both of my eyes open." Jackson took the hands-on approach to directing Weta Digital during postproduction, which Spielberg will supervise through videoconferencing. Jackson will also begin development for the second film for which he will be officially credited as director. Spielberg says "there will be no cell phones, no TV sets, no modern cars. Just timeless Europe." His cinematographer Janusz Kamiński serves as lighting consultant for Weta, and Jackson said the film will look "film noirish, very atmospheric". Spielberg finished six weeks of additional motion-capture filming in mid-July. 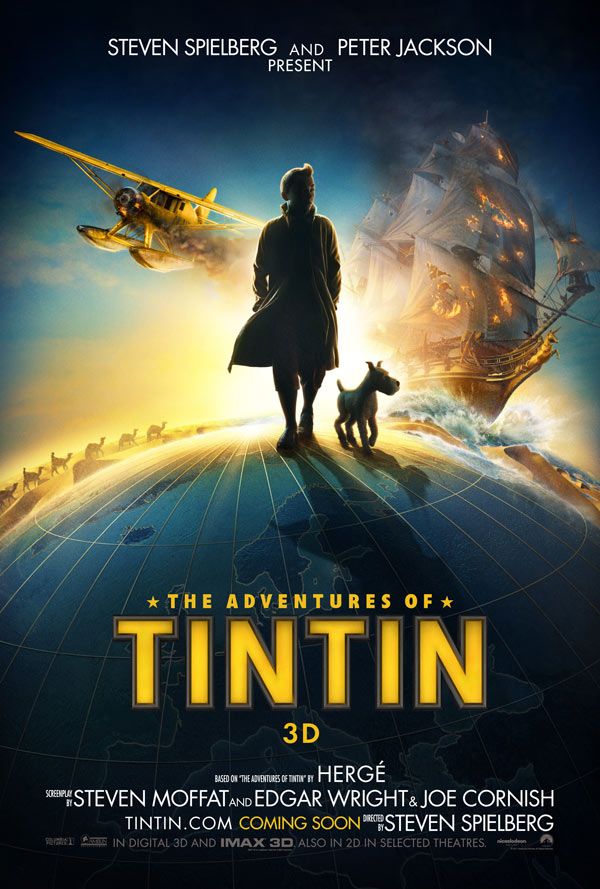 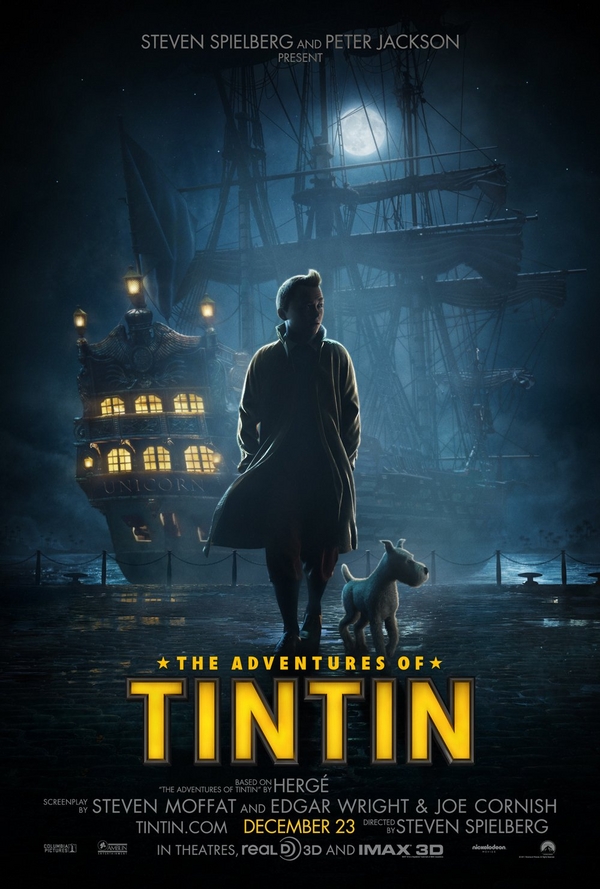