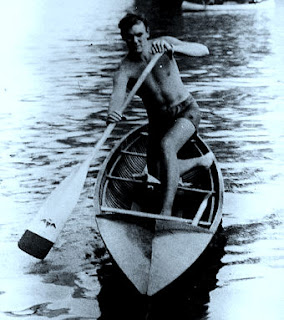 Not many people have heard of Bill Havens. But Bill became an unlikely hero of sorts — at least among those who knew him best. Here is his story:

At the 1924 Olympic Games in Paris, the sport of canoe racing was added to the list of international competitions. The favorite team in the four-man canoe race was the United States team. One member of that team was a young man by the name of Bill Havens.

As the time for the Olympics neared, it became clear that Bill's wife would give birth to their first child about the time that the US team would be competing in the Paris games. In 1924 there were no jet airliners from Paris to the United States, only slow ocean-going ships.


And so Bill found himself in a dilemma. Should he go to Paris and risk not being at his wife's side when their baby was born? Or should he withdraw from the team and remain with his family? Bill's wife insisted that he go to Paris. After all, competing in the Olympics was the culmination of a life-long dream. But Bill felt conflicted and, after much soul-searching, decided to withdraw from the competition and remain home where he could support his wife when the child arrived. He considered being at her side his highest priority — even higher than going to Paris to fulfill his dream.

As it turned out, the United States four-man canoe team won the gold medal in Paris. And Bill's wife was late in giving birth to their child. She was so late, in fact, that Bill could have competed in the event and returned home in time to be with her when she gave birth. People said, "What a shame." But Bill said he had no regrets. For the rest of his life, he believed he had made the better decision.

There is an interesting sequel to the story of Bill Havens... The child eventually born to Bill and his wife was a boy, whom they named Frank. Twenty-eight years later, in 1952, Bill received a cablegram from Frank. It was sent from Helsinki, Finland, where the 1952 Olympics were being held. The cablegram read: "Dad, I won. I'm bringing home the gold medal you lost while waiting for me to be born."

Frank Havens (see photo) had just won the gold medal for the United States in the canoe-racing event, a medal his father had dreamed of winning but never did. Like I said — no regrets.

One of the most common complaints I hear from families is that they are not close. They may be close in proximity, but still not feel close as a family. They may live next door or in the same house, but not feel close emotionally.

Closeness is not about latitude; it's about attitude. We feel close when we feel understood, when we feel loved and when we simply enjoy being together. We may live far apart and still feel close, or we may share a home yet feel distant.

Closeness is a family trait that grows over time. It is planted by love, watered by honest sharing and fed by true listening. It grows slowly and sometimes takes years to mature; but its roots grow deep. It can weather most any storm and sustain a family through the most difficult of times.

I received a letter from a reader in Hawaii. She pointed out that the CEO of one of the island's largest banks was considering a run for governor. Since he is well-liked, he seemed to have a good chance of winning.

But, before filing papers, he changed his mind, stating that he wanted to spend more time with his family. Not that elected officials cannot be family-oriented, but he felt he needed more time at home than the job allowed.

Ronald A. Young, in the Honolulu Advertiser, said this about the candidate's decision: "No matter what you accomplish in the business world or the social world, if you fail 'ohana' [family], then you have not accomplished much. Failure or success does not lie in the material wealth you provide them. It is measured by what of yourself you give to them."

He made a decision to give the best of himself to "ohana." He chose family closeness first, despite pressure to put more time elsewhere. It's likely a decision he'll never regret.

Thomas Kinkade eloquently said, "When we learn to say a deep, passionate yes to the things that really matter... then peace begins to settle onto our lives like golden sunlight sifting to a forest floor.
------------
http://www.inspirationline.com/EZINE/19JULY2004.htm
Posted by pratanacoffeetalk at 3:40 PM