MAGIC: THE GATHERING COMMUNITY IN JAKARTA 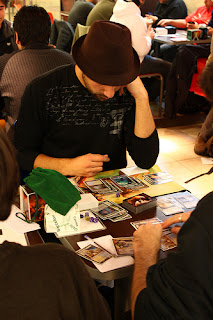 A horde of supernatural creatures gathers in the room.

One is a brownish, smelly-looking ogre who seems like he has mastered the art of the staredown. Another is a muscled warrior wearing a knight’s helmet, his long hair flowing down to his torso, wielding an ancient-looking ax clutched firmly in his hands. And, of course, there is the requisite bearded sorcerer carrying his staff.

The sorcerer smiles. “This is our whole tribe” he says by way of introduction. “And I’m Yopie.” He extends his hand.

Yopie Effendi is, of course, not a real-life sorcerer, and this is not a monster’s coven.


Yopie, together with others at the Citadel Games and Hobby Shop at the Senayan Trade Center in South Jakarta, are but a few of the millions of fans of the extremely popular fantasy collectible card game, Magic: The Gathering

Magic: The Gathering, or MTG for short, is a fantasy card game that a math professor came up with in the early 1990s. It revolves around the world of goblins, knights, wizards and a host of other characters from faraway fantasy lands.

Yopie, 33, owns the Citadel store where some of the country’s biggest Magic fans congregate. At the store, they meet up to battle each other or just to hang out.

Looking more like a businessman than a nerdish gaming aficionado, Yopie, who has played for the Indonesian national Magic team in Japan and Belgium, explains what the estimated 300-strong local chapter of this global fantasy world is all about.

“It’s like a family. The MTG fans who hang out here [at the Citadel Hobby Shop] range from teenagers to men with families,” he says, before quickly adding that the older players tend to gather only after work or during long holidays.

“We already have other responsibilities” he says with a laugh.

But unlike Dungeons and Dragons, Magic does not require a board, relying solely on playing cards, each of which represent a character, a spell, an item or land. While not a necessity, players can also use some figurines or multisided dice.

The goal of each game is to extinguish the “health points” of one’s enemies using a deck of about 20 cards — or any designated number of cards for that matter — that contains a variable combination of items, lands, spells or creatures. The ability to mix an effective combination of cards is the key to a winning deck.

Benny is a high school student who has skipped his extracurricular English class so to hang out with some friends at Yopie’s shop.

“You can have an enormous collection of thousands of cards, but if you can’t combine the right cards for each battle, then you’re going down fast, man,” he says.

Benny explains that he has a “small collection of around 100 cards,” but that he is able to effectively combine what he has.

“It’s all about knowing the strengths and weaknesses of your opponent’s deck and their style of playing,” says Haryanto, a 21-year-old college student visiting Yopie’s shop to purchase a booster pack.

“When I only had my first intro pack, I was able to beat a guy who already had tons of cards in his hands. There are a lot of Magic players like that, who are just collectors wanting to show off, but have never immersed themselves in the gameplay.”

In Magic, the spells are divided among five colors, each representing a specific power and emotion. This is one of the card game’s most popular aspects and one that is exclusive to it compared to other fantasy card games.

Yopie explains that players can mix their decks into a “defensive, offensive, aggressive or any other kind of deck.”

“A beginner can buy the intro pack, which should contain most of the starter cards needed to play a game, each [game] lasting for about an hour or so,” he says.

“After that, they can purchase a booster pack if they want to add a new variety of cards into their deck and perhaps obtain stronger cards” Yopie says, adding that there used to be cards that cost around $10,000 each.

“They were called the Power Nine cards and they were produced together with the first Magic cards. But their usage in a game is rather frowned upon these days because essentially they are too strong. If a person uses them in a game, they can basically win in one go and not even give any of the other players a chance to play.”

Eric Tan, a 33-year-old designer who has played in many international tournaments, says that Magic “is a game that relies heavily on the power of the brain.”

Yopie agrees. “It’s not just a fun hobby. It is a mix of logic, mathematics and wits,” he says, adding that for him, the game is fun because of the mix of players, ranging from just two to eight in number, and the variety of gameplay involved.

“The players can form teams or play individually and try to annihilate each other,” he says.

Most of the players are also fluent in English, a necessity in a game where all of the information is written in rather complex English laden with unusual terms.

The local kartumagic.com forum illustrates this point, with aficionados using a language incomprehensible to non-players in their discussions.

“Game 1 was a perfect example of why I love this deck. Turn 1 Steppe Lynx, turn 2 Goblin Guide + Might of Alara for 4, turn 3 PTE the blocker and Tribal Flames. Yes, that’s right, 21 damage by turn 3. My opponent’s plays were turn 1 ponders, turn 2 coiling oracle, and then he died,” writes one player on the Web site about his last match in a tournament.

Yopie says that in Indonesia, the older players have been into the game since it was introduced, but it was only a few years ago when Magic really took off.

“During the 1990s, there was just a lack of publicity regarding Magic” Yopie says.

“I got into it in 1993,” Eric says. “It had actually already made its way here, but I stopped for a while [because I had to work and had a family to take care of]. I’ve started again since a year ago.”

Eric and Yopie both found out about the game through a newsletter that Yopie used to get at his old comic book store.

The ads for the cards piqued their interest and Yopie began contacting suppliers abroad. By the mid-1990s, Yopie was the official distributor for Magic products in Indonesia.

These days, there are numerous Magic players in the country. Yopie says that these players often take part in the annual national tournament, which features prize money of about $1,500, in addition to collectible, and thus pricey, cards.

International tournaments have also been held in places such as Tokyo and Paris.

“The [local] prize money officially comes from [the international distributor of] Magic because we’re their official distributors here,” Yopie says.

This Magic enthusiast is hoping that his tribe will expand and Indonesia will one day fully embrace the game.