J-POP FEMALE SINGER WHICH IS NOT A REAL HUMAN (video) 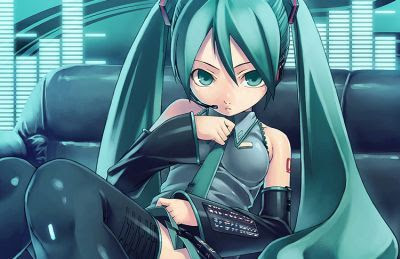 Japanese teenage pop sensation Miku Hatsune has millions of smitten fans, a string of top hits and an image entirely unblemished by drug use, scandals or celebrity meltdowns.

She doesn't demand six-figure recording contracts, always shows up on time, never throws tantrums and won't break a sweat during a two-hour live show in a concert hall packed with thousands of adoring followers.

Too good to be true? Yes and no.


The collaborative brainchild of software developers, a manga comic artist and a vast digital fan community, the virtual singer from outer space has become one of the hottest stars on the J-pop scene.

Next month she's giving her debut US concert, the "Mikunopolis" show on July 2 at the Anime Expo 2011 in Los Angeles.

Miku may not, technically, be real, but that didn't stop several thousand fans, most of them young men, from flocking to her latest live gig in Tokyo, where the android star enthralled her audience from an onstage screen. 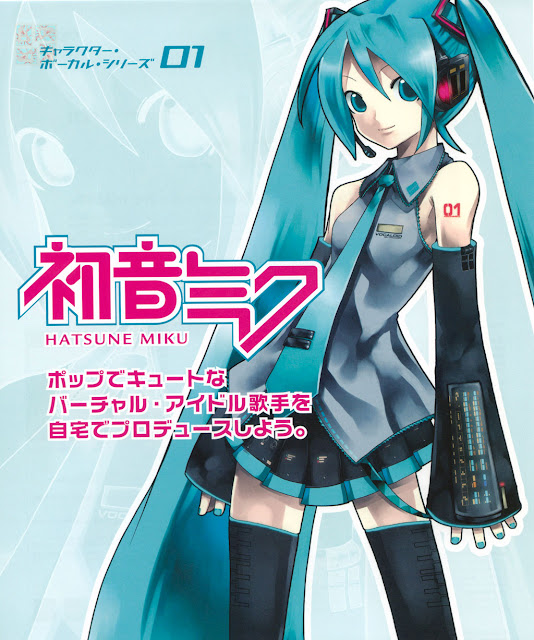 "We can see her but we can't touch her. We think she is a true idol, the purest kind of idol," gushed 21-year-old literature student Keisuke Umeda, decked out in a Miku T-shirt and a range of her merchandise.

"She's so cute, and she dances so well," nodded his girlfriend Azusa Fushimi, 20, a design student dressed in a self-made Miku outfit for the occasion, complete with body-length aquamarine pig-tails.

Below the strobe lights, TV cameras and disco balls, fans were jabbing the air with fluorescent glow-sticks even before Miku showed up and while her very human support band was still fidgeting with their instruments.

An excited roar rippled through the crowd when she burst onto the stage as a cloud of pixels that morphed into the shape of a petite galactic manga vixen with thigh-high boots and an impossibly short miniskirt.

The programmers who created Miku are vague about her persona, but very specific about her stats -- the teenage pop queen is 158 centimetres (five feet two) tall and weighs a dainty 42 kilogrammes (93 pounds). 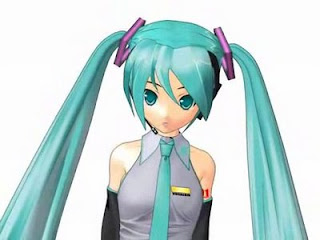 What followed was an energy-packed, pixel-perfect show with all the usual elements of a rock concert -- light banter between star and audience, strobe lights, bursts of dry ice, and a series of well-received encores.

Unlike her flesh-and-blood pop sisters, Miku changed costumes at the speed of a mouse-click -- wearing a sailor-girl school uniform one moment and a China-doll red silk number with a paper hand-fan the next.

To the casual observer, Miku's strange show, held in March, could easily appear like a glimpse into a dystopian future when humans will slavishly celebrate computer programmes.

But to insiders and fans, the phenomenon is a far more participatory, collaborative and interactive experience than a normal concert, because fans don't just sing along with the hits -- they create them.

The software engine behind Miku is Yamaha's Vocaloid music programme, which allows fans to literally put words in her mouth, by typing in lyrics and a melody that creates a synthetic voice track.

The company Crypton Future Media, based in Sapporo on the northern island of Hokkaido, created the Miku Hatsune character in 2007 with the help of a manga artist and voice samples from a real singer, Saki Fujita.

Fans were invited to breathe life into her, and they have -- posting more than 30,000 songs and films featuring the virtual star on video sharing websites such as YouTube and Japan's Nico Nico Douga.

The creative outpouring has spawned a number of real-world hits, and a compilation of Vocaloid songs featuring Hatsune Miku in May 2010 hit number-one on one Japanese weekly's album charts.

Amid her meteoric rise, the galactic vixen really has reached for the stars.

When Japan launched the its Venus Climate Orbiter Akatsuki in May last year, the spacecraft carried three aluminium plates depicting Miku, thanks to a fan petition with more than 10,000 signatures.

US fans can see Miku live on July 2 at the "Mikunopolis" concert, sponsored by Sega and Toyota, at the Anime Expo 2011 which runs at the Los Angeles Convention Center from July 1-4.
------------
http://www.thejakartaglobe.com/lifeandtimes/japan-3-d-pop-avatar-a-real-world-hit/446452
http://s3.amazonaws.com/bt_assets/system/idea_thumbnails/24647/original/hatsunemiku.jpg?1287800619
http://awtlblog.vitsco.com/wp-content/uploads/2009/11/Hatsune-Miku.jpg
http://3.bp.blogspot.com/_ML_kFkjpdzE/SHYLW9CDeyI/AAAAAAAAFuM/cVi80V-bqos/s400/Miku_Hatsune_Atomic_Glide_2.jpg
Posted by pratanacoffeetalk at 1:27 PM