C.S. LEWIS: THE CREATOR OF NARNIA 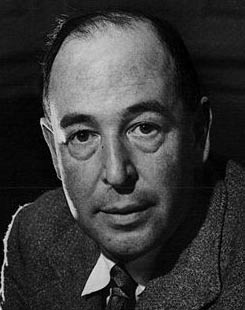 Clive Staples Lewis (29 November 1898 – 22 November 1963), commonly referred to as C. S. Lewis, was an Irish author and scholar. Lewis is known for his work on medieval literature, Christian apologetics, literary criticism and fiction. He is best known today for his series The Chronicles of Narnia.

Lewis was a close friend of J. R. R. Tolkien, the author of The Lord of the Rings, and both were leading figures in the English faculty at Oxford University and in the informal Oxford literary group known as the "Inklings". Due in part to Tolkien's influence, Lewis converted to Christianity, becoming "a very ordinary layman of the Church of England". (Lewis 1952, pp. 6) His conversion had a profound effect on his work, and his wartime radio broadcasts on the subject of Christianity brought him wide acclaim. Late in life he married the American writer Joy Gresham, who died of bone cancer four years later at the age of 45.


Lewis's works have been translated into over 30 languages and continue to sell over a million copies a year; the books that comprise The Chronicles of Narnia have sold over 100 million copies. A number of stage and screen adaptations of Lewis's works have also been produced, the most notable of which is the 2005 Disney film adaptation of The Lion, the Witch and the Wardrobe. 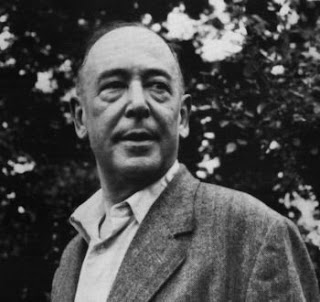 Although raised in a church-going family in the Church of Ireland, Lewis became an atheist at the age of 13, and remained as such until he was 31 years old. His separation from Christianity began when he started to view his religion as a chore and as a duty; around this time he also gained an interest in the occult as his studies expanded to include such topics.

Influenced by arguments with his Oxford colleague and friend J. R. R. Tolkien, and by the book The Everlasting Man by Roman Catholic convert G. K. Chesterton, he slowly rediscovered Christianity. He fought greatly up to the moment of his conversion noting he likened himself to a, "'...prodigal who is brought in kicking, struggling, resentful, and darting his eyes in every direction for a chance to escape.." He described his last struggle in Surprised by Joy:

"You must picture me alone in that room in Magdalen, night after night, feeling, whenever my mind lifted even for a second from my work, the steady, unrelenting approach of Him whom I so earnestly desired not to meet. That which I greatly feared had at last come upon me. In the Trinity Term of 1929 I gave in, and admitted that God was God, and knelt and prayed: perhaps, that night, the most dejected and reluctant convert in all England." (Lewis 1966) 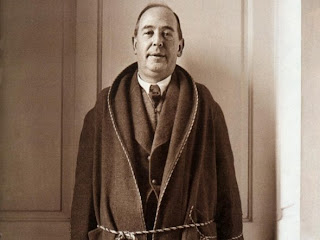 After his conversion to theism in 1929, Lewis converted to Christianity in 1931. Following a long discussion and late-night walk with his close friends Tolkien and Hugo Dyson, he records making a specific commitment to Christian belief while on his way to the zoo with his brother. He became a member of the Church of England — somewhat to the disappointment of the devout Catholic Tolkien, who had hoped he would convert to Roman Catholicism.

A committed Anglican, Lewis upheld a largely orthodox Anglican theology, though in his apologetic writings, he made an effort to avoid espousing any one denomination. In his later writings, some believe he proposed ideas such as purification of venial sins after death in purgatory (The Great Divorce) and mortal sin (The Screwtape Letters), which are generally considered to be Catholic teachings. Regardless, Lewis considered himself an entirely orthodox Anglican to the end of his life, reflecting that he had initially attended church only to receive communion and had been repelled by the hymns and the poor quality of the sermons. He later came to consider himself honoured by worshipping with men of faith who came in shabby clothes and work boots and who sang all the verses to all the hymns. 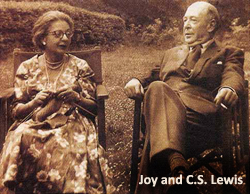 In Lewis's later life, he corresponded with and later met Joy Davidman Gresham, an American writer of Jewish background and a convert from atheistic communism to Christianity. She was separated from her husband and came to England with her two sons, David and Douglas Gresham. Lewis at first regarded her as an agreeable intellectual companion and personal friend, and it was at least overtly on this level that he agreed to enter into a civil marriage contract with her so that she could continue to live in the UK. Lewis's brother Warnie wrote: "For Jack the attraction was at first undoubtedly intellectual. Joy was the only woman whom he had met ... who had a brain which matched his own in suppleness, in width of interest, and in analytical grasp, and above all in humour and a sense of fun." (Haven 2006) However, after complaining of a painful hip, she was diagnosed with terminal bone cancer, and the relationship developed to the point that they sought a Christian marriage. Since she was divorced, this was not straightforward in the Church of England at the time, but a friend, the Rev. Peter Bide, performed the ceremony at Joy's hospital bed in 1956.

Joy's cancer soon went into a remarkable yet brief remission, and the couple lived as a family (together with Warren Lewis) until her eventual relapse and death in 1960.

THE CHRONICLES OF NARNIA

The Chronicles of Narnia is a series of seven fantasy novels for children and is considered a classic of children's literature. Written between 1949 and 1954 and illustrated by Pauline Baynes, the series is Lewis's most popular work having sold over 100 million copies in 41 languages (Kelly 2006)(Guthmann 2005). It has been adapted several times, complete or in part, for radio, television, stage, and cinema. The series has been published in several different orders, and the preferred reading order for the series is often debated among fans; though Douglas Gresham has stated that Lewis preferred that they be read in "Narnian chronology", not the order in which they were published. (Drennan 1999) 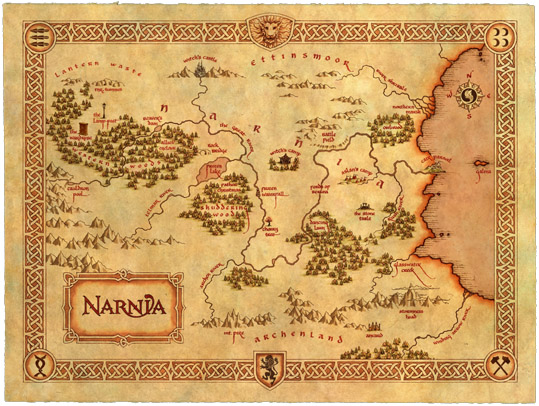 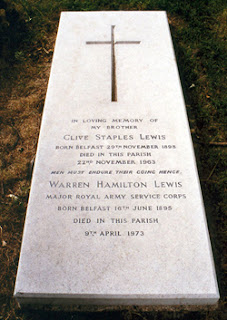 The books contain many allusions to Christian ideas which are easily accessible to younger readers; however, the books are not weighty, and can be read for their adventure, colour and richness of ideas alone. Because of this, they have become favourites of children and adults, Christians and non-Christians. In addition to Christian themes, Lewis also borrows characters from Greek and Roman mythology as well as traditional British and Irish fairy tales. Lewis reportedly based his depiction of Narnia on the geography and scenery of the Mourne Mountains and "that part of Rostrevor which overlooks Carlingford Lough". (Guardian Unlimited 2005) Lewis cited George MacDonald's Christian fairy tales as an influence in writing the series.

The Chronicles of Narnia present the adventures of children who play central roles in the unfolding history of the fictional realm of Narnia, a place where animals talk, magic is common, and good battles evil. In the majority of the books, children from our world find themselves transported to Narnia by a magical portal. Once there, they are quickly involved in setting some wrong to right with the help of the lion Aslan who is the central character of the series.
---------------
http://www.biographyonline.net/writers/cs-lewis.html
http://www.squidoo.com/aslanspride?utm_source=google&utm_medium=imgres&utm_campaign=framebuster
Posted by pratanacoffeetalk at 11:35 AM