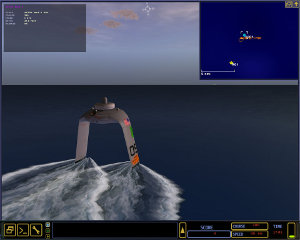 The Navy will eventually use the software, but its available now in the Dangerous Waters computer game as well as a free online download.

The Department of Defense (DOD) has developed simulation technology to help the Navy track enemy submarines that it's testing through integration into commercial computer-gaming software.

The Defense Advanced Research Project Arm's Anti-Submarine Warfare (ASW) Continuous Trail Unmanned Vessel (ACTUV) software simulates evasive maneuvers by submarines and challenges players to successfully track them. It's been developed by the agency as a precursor to actually adding autonomous software for tracking submarines to the ACTUV program's computers, according to the agency.
To reach a broad number of users for the test, DARPA has integrated it into the Dangerous Waters computer game by Sonalysts Combat Simulations. The ACTUV Tactics Simulator also is available online  as a free download.

More and more DARPA is seeking input from the public on the technology it's developing. Last month, the agency crowdsourced the design of next-generation combat vehicles through a project called the eXperimental Crowd-derived Combat-support Vehicle (XC2V) Design Challenge.

In fact, for more than a year now, DARPA has been experimenting with the Web, social networking, and online competitions as a part of its approach to R&D. One of the earliest moves of this effort was the DARPA Network Challenge in December 2009, which the agency used to explore how people can use social networking and the Internet to solve broad, time-critical challenges.

DARPA has designed the ACTUV software to put players into situations that are as similar as possible to real warfare, it said. They control a tracking vessel that must share the sea with commercial shipping traffic as it attempts to track a submarine practicing realistic evasive maneuvers.

Players can earn points by achieving mission objectives, and DARPA is keeping track of the competition on a website showing game leaders. People also can share experiences and advice about the simulator with other players on the site.

Once sufficiently tested, the Navy eventually plans to add the new software to its ASW toolkit, according to DARPA.

The U.S. military is increasingly exploring its options to use advanced technologies like computer simulation and 3-D to improve both its warfare tactics and peacekeeping operations.

In addition to work being done at DARPA, the Army is developing an entire Second Life-like virtual world to simulate some of its peacekeeping operations and act as a training ground for soldiers. The complex architecture is meant to support thousands of avatars and Internet connections at once.
--------------
By Elizabeth Montalbano InformationWeek
April 05, 2011 17:07 PM
--------------
http://www.informationweek.com/news/government/security/229401003?nomobile=1
Posted by pratanacoffeetalk at 1:11 PM