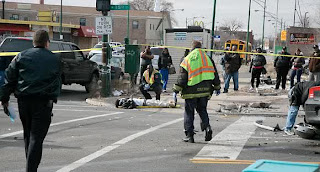 At least 13 people were hurt -- three seriously -- when gunmen opened fire near 75th Street and Vincennes Avenue in Englewood this morning and apparently caused a CTA bus to crash, officials said.

It did not appear that anyone was wounded by gunfire, but instead were injured in the accident or by flying glass, the officials and witnesses said.

The incident began around 9:30 a.m. when two men jumped from a red truck and began walking down the block, firing as the truck followed them, a witness said. They appeared to be aiming at a black car.

"These young guys stepped out with AK-47s or Uzis or something and shot up the whole block," said Al Perkins, head cook at Ryan Anthony's restaurant in the 7400 block of South Vincennes.

"They got out of this red truck and starting walking and shooting," Perkins said. "I think they were aiming at a black car down the block. . .Once they got done, they ran back to the truck."

He said the black car was roped off by police at the scene.

Perkins said he saw at least five people hurt: One in a car, three on the sidewalk and a woman who staggered into the restaurant with a wound to the arm.

"She was getting ready to park," Perkins said. "She said they just started shooting."
The made it to the entrance of the restaurant. "She was laid out on the floor in the doorway."

During the shooting, a car veered into a westbound 75 CTA bus, pushing the bus into a light pole and  injuring the driver and five passengers, said CTA spokeswoman Lambrini Lukidis.   The injuries were not believed life-threatening, she said.