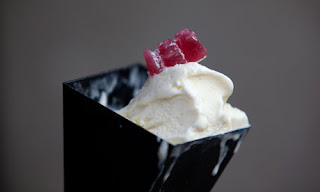 A restaurant in central London's Covent Garden district is selling ice cream on its menu made from human breast milk. The milk, donated by 35-year-old Victoria Hiley, is churned and served as ice cream with a wafer.


The dessert called Baby Gaga can be served with Calpol as an option. The natural delicacy will set you back £14 ($23) for the dish at Icecreamists. Restaurant owner Matt O'Connor advertised for breast milk donations on the internet and he believes the dessert will be a big hit.

The treat is made by mixing breast milk with Madagascan vanilla pods and lemon zest. The dessert is offered up in a martini glass. Liquid nitrogen is also poured into the glass using a syringe.


The exotic restaurant has been described as, "More Sid and Nancy than Ben and Jerry's" by top people's store Selfridge's. Mr O'Connor believes that if breast milk is good enough for our babies then it must be good enough for everyone else. He told BBC London, "Some people will hear about it and go yuck - but actually it's pure organic, free-range and totally natural."


The milk, which has been medically-tested and approved, fetches £15 for every ounce Mrs Victoria Hiley produces. She has called the idea "a great recession beater", as reported in Asylum. In her day job Victoria works with women who have problems breast feeding their babies. She believes that if adults realise how tasty breast milk actually is, new mothers will be more keen to continue breastfeeding their babies. She insists breast milk is much more easily digestible than the more traditional cows' milk ice cream.


"It wasn't intrusive at all to donate - just a simple blood test," said Victoria.
"What could be more natural than fresh, free-range mother’s milk in an ice cream?


"And for me it’s a recession beater too – what’s the harm in using my assets for a bit of extra cash! It’s a bit of fun isn’t it?"


The Food Standards Agency says there are no specific laws prohibiting businesses from selling human milk products, but they must comply with general food safety laws to ensure the product is safe for consumption.
Matt O’Connor, resplendent in a pink, purple and white jacket, insists not. "The Baby Gaga tastes creamy and rich" says Matt . "No-one's done anything interesting with ice cream in the last hundred years.


"We've came up with a method of infusing ice-cream with breast milk. We wanted to completely reinvent it.


"And by using breast milk we've definitely given it a 100% makeover. Itʼs just one of a dozen radical new flavours weʼve invented. We want to change the way people think about ice cream."


"But actually it's pure, organic, free-range and totally natural. I had a Baby Gaga just this morning and I feel great."


The Icecreamists say Baby Gaga will be on the menu as long as the supplies keep flowing.